In Sunday's match against Swansea, we learned that Tim Sherwood is not wedded to the 4-4-2 and Nabil Bentaleb bears a passing (statistical) resemblance to one of the world's best defensive midfielders.

Share All sharing options for: Tactics Tuesday: Spurs vs. Swansea

Spurs continued their excellent Premier League record under Sherwood in a convincing victory at the Liberty Stadium.

Tim Sherwood played a 4-1-4-1 formation with Roberto Soldado making way for Nacer Chadli, while Michael Laudrup maintained Swansea's typical 4-3-3 formation, with Jordi Amat filling in at defensive midfielder due to various injuries in the Swans' midfield.

The most notable tactical feature of the game from a Tottenham perspective was Sherwood's decision to play with three central midfielders. Prior to this match, Sherwood had lined up the side in a lopsided 4-4-2 formation, with Christian Eriksen coming inside from a left midfield position. While Spurs had no problems scoring in this formation, there was often an alarming amount of space granted to opposition teams in midfield.

The deficiencies in this formation were obvious as early as Sherwood's first game in charge against Southampton. Even less technically proficient sides like Crystal Palace had little trouble creating numerous good chances against Spurs, in part because of the lack of cover two central midfielders provide.

While Spurs were not perfect defensively against Swansea, having an extra midfielder made a big difference. Swansea found space between Spurs midfield and defense at times but were limited mainly to potshots from outside the box. 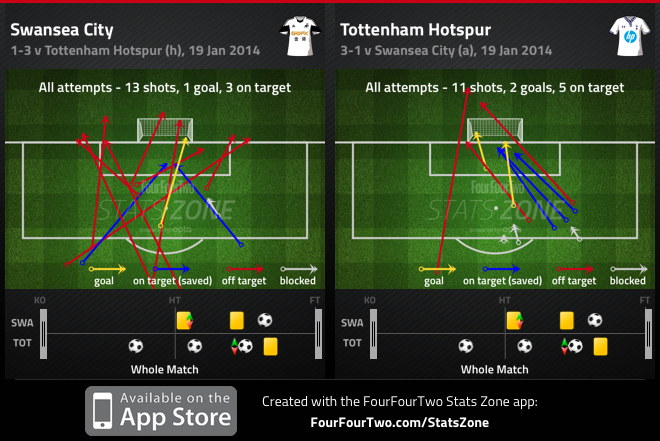 As the lone holding player, Nabil Bentaleb (circled above) shouldered a tremendous amount of responsibility. Tasked with shielding the back-four and recycling possession, Bentaleb put in an excellent performance after a somewhat shaky first 20 minutes. 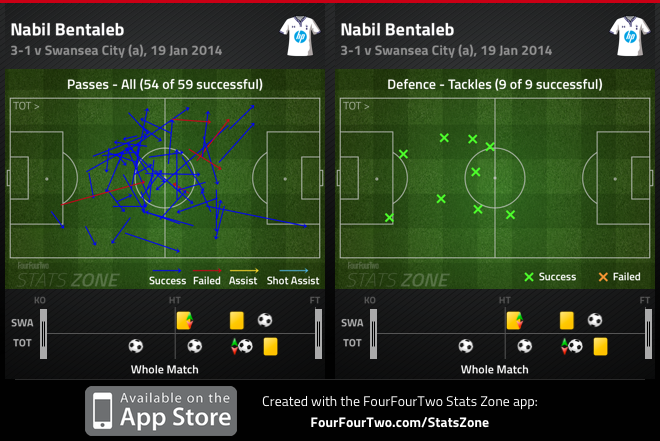 Bentaleb's 9 tackles (10 according to various other sources) were the most by any player in a Premier League game this season. The number is likely higher than Sherwood would prefer - tackling is often an indication that something went wrong in defense rather than something good teams aspire to do frequently - but Bentaleb's tenacity is still admirable.

These runs make Dembélé a more complete and dangerous midfielder. He forced an own goal against Stoke after a similar run to the one above and should have scored (or squared the ball to Adebayor) on another run behind the defense later in the Swansea game.

Overall, Bentaleb has justified Sherwood's decision to play him ahead of Étienne Capoue, or at least made it seem less crazy than it seemed a couple of weeks ago. Ted Knutson wrote an article last week on what great defensive midfielders look like from a statistics perspective, and whether there are any similar players out there. The article is by no means definitive; it's very much unknown which statistics, if any, provide reliable indicators of how good a given defensive midfielder is. Still, it's an interesting idea, particularly in the context of Bentaleb.

One of the players Knutson looked at was Barcelona's Sergio Busquets, widely regarded as one of the best, if not the best, defensive midfielder in the world. He found that players such as Yaya Toure (in his Barcelona days), Esteban Cambiasso (at Inter Milan), Michael Carrick, Paul Scholes, Mikel Arteta, Thiago Alcantara, and Joe Allen all bear a statistical resemblance to Busquets.

While Bentaleb has only played 276 minutes, or just over three full games, I thought it might be worth taking a look to see how he stacks up. As, it turns out, Bentaleb has very similar statistics to those of Busquets.

The one area where Bentaleb falls short is "key passes", though Bentaleb will likely improve in that area, given the vision he has demonstrated thus far.

Bentaleb is by no means the finished product - he played a part in Spurs' collective failure to clear the ball prior to Wilfried Bony's goal, as Windy pointed out this week - but if he's looking for a player to model his game after, he could do worse than Sergio Busquets.

The key attacking players under Sherwood are undoubtedly Emmanuel Adebayor and Christian Eriksen. Sherwood, true to his Redknapp 2.0 stereotype, takes no credit for their performance under him, other than that he's put them in "the position in which their best suited."

Adebayor has played as a complete forward for Spurs - scoring goals, winning aerials, creating chances for others - but maybe his most valuable contribution is as an outlet when Spurs regain possession in their own half. Sherwood has not tasked Adebayor with a heavy pressing role, preferring to keep him fresh for the attacking side of the game. One of the few tactical instructions that Sherwood has revealed to the media is that the players are to roll the ball into Adebayor's feet at every opportunity. From here, he can hold off defenders and bring midfielders into play or turn his defender and attack goal himself.

Eriksen, for his part, has demonstrated in the last few games why he's been one of the most highly-rated young playmakers in the world for several years now. He couples unbelievable awareness with superb technique.

As Mike Goodman pointed out on Grantland this week, Spurs good Premier League run has come against teams below them in the league table and the road ahead will be much bumpier until the end of March. This is the real test for Sherwood and the team. If Spurs do well, it could mean Champions League and an extension for Sherwood. If Spurs do poorly, well, it could be "Goodbye, Charlie."