On Winning Close Matches, Part I: Can clutch continue?

After a big win for Tottenham Hotspur at Old Trafford, I find myself in the position of explaining why my numbers give us only a roughly 15% chance at making the top four. The reason is that, even though Spurs have struggled to convert shots into goals, the club as a whole has been clutch in the timing of their goals.

Share All sharing options for: On Winning Close Matches, Part I: Can clutch continue?

One of the early findings of baseball statheads was that winning one-run games was not a good indicator of future team success. Whatever had gone into winning those games, whether random chance or clutchitude, teams show next to no ability to persistently win close games. Good baseball teams are the ones than win 6-1 games, not the ones who aren't good enough to thump their opponents on a regular basis.

I mention this because right now, Tottenham Hotspur are kind of the equivalent of a baseball team with a 21-5 record in one-run games. Of Spurs' matches this season, fourteen have been decided by one goal or less, while six have been decided by more than one goal. Spurs are 8-4-2 in close matches, 3-3 in less close matches. That is, as I will show, an unusual split, and one that usually portends regression.

Now, football is a much lower-scoring sport than baseball. It's also a very different sport. So we should assume, based on the first point, that at the least there is likely more team ability to consistently win close matches in football than in baseball. Based on the second point, well, we should do a study of football teams. So I did!

I took all matches from the last decade in the Premier League and coded whether they were close (decided by <2 goals) or not (decided by >1 goal). I split each team-season into two halves, divided by the New Year.

The r-squared correlation for all matches was 0.37, for matches decided by more than one goal was 0.31, and for matches decided by one goal or none 0.06. (For an explanation of r-squared as a statistical method see my discussion in this piece.) This means that how well a team does in blowouts and other easy wins or losses is a pretty good statistical marker of a team's likely future performance, while a team's record in close matches is a very poor predictor of their future performance.

I will write a second post on this data this weekend with the full data set in tables. For now, I have three scatter plots for visualizations. 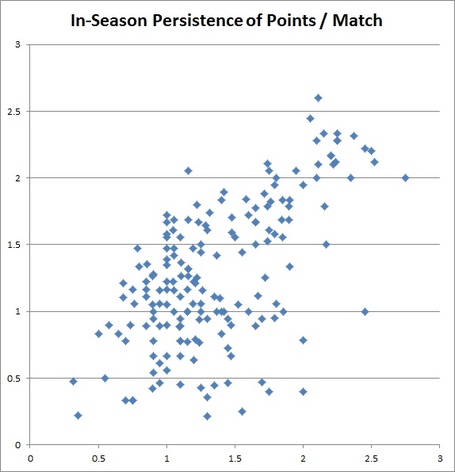 You can see the real persistence of points per match between the first and second halves of the season. This is of course an obvious result, everyone knows that better teams are better than worse teams. But it gives us a good baseline. We shouldn't expect a higher correlation than this if we look at a smaller sample of matches. This is about as well as a points-based predictor can do.

So this is the graph for points per match in only matches decided by more than one goal. 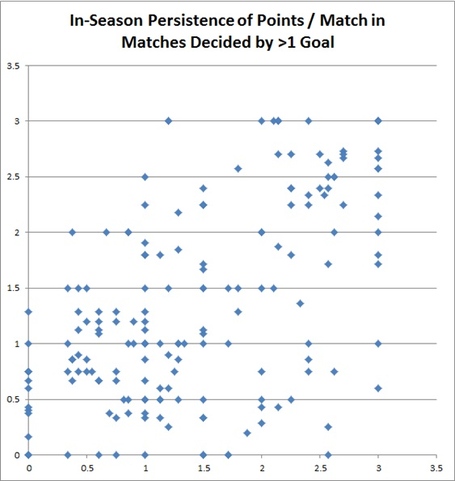 You can see the obvious problem here that with so few matches, and with every match yielding either zero or three points, you get a kind of weird shape. Nonetheless, it is striking how full the top right and bottom left quadrants are, and how sparse the top left and bottom right. The correlation here is nearly though not quite as good as the correlation in all matches.

This is not a terribly surprising result. Of course good teams are more likely to win big and less likely to lose big. But I think it's notable in comparison to the final chart. This is the in-season correlation of points / match in matches decided by less than two goals. 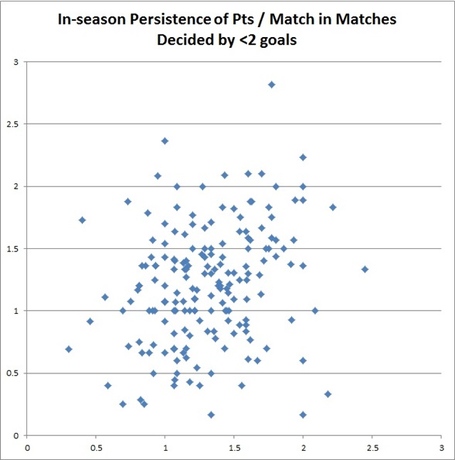 I'm not saying that winning close matches is "luck." In general, I think that winning clubs have usually played better than losing clubs. But whatever it is that leads to good performances in close matches, usually it doesn't carry over as the season progresses. We shouldn't use points taken from close matches as a good predictor of future points.

In short, this is why I have Tottenham Hotspur rated as relatively unlikely to finish in the top four this season. While the club is better than their goal difference, the club has been extremely good in the clutch this season, consistently finding a way to get the deciding goal in a close game while denying such deciding goals to their opponents. The last fifteen minutes at Old Trafford were only the most recent example of this trend. As nice as the trend is, the historical evidence suggests we should not expect it to continue. And if Spurs keep producing and allowing chances at the same rate they have all season, but without the same clutch conversion and penalty numbers, they will fall out of contention this spring. Spurs, simply, need to play better.

Some of the clubs overperforming are obviously just bad. So I separated out the non-crappy sides as our Spurs analogues. That gives us the following comparands:

This is not a happy set of comparands—the best sides here finished with point totals in the low to mid-60s. That doesn't mean it's impossible for Spurs to finish higher, but it's not exactly reason for optimism either.

The Bottom of the Table: Doooooooom

The first thing that struck me, with this data set, is that if a club is already quite bad, and also seriously overperforming expectations in close matches, that club is screwed. Burnley and Reading were relegated, while Fulham escaped relegation by a single point. Hull City walked the tightrope in 08-09 and finished a point above the drop, then tried the same act in 09-10 and did not survive.

This bodes exceptionally poorly for Cardiff City. Clubs that don't win a single match by more than a goal in the first half of the season usually get relegation. Here's the complete list:

Birmingham are sort of a weird case where 19 of their first 20 matches were decided by no more than a goal, so they don't really belong here. That leaves Stoke City from 2008-2009 and last year's Norwich City as the only clubs who finished solidly above the relegation fight. That is not good company for the BlueRed BirdsDragons.

This again doesn't mean Cardiff are definitely doomed, but it strikes me as a pretty good leading indicator of doom.

Next: The flip-side, clubs with anomalously poor records in close games. Spoiler: Arsenal's comeback last year might have been more foreseeable than it seemed in real time. Prediction: Swansea City will pick up their performance in the new year.