No movement at the top this week. Let's talk about relegation.

Last season's Premier League race featured two big unexpected stories. First Arsenal ran out to an early lead in the table and held it with excellent play through the holidays, after which injuries and some regression to the mean in shot conversion dropped them out. But at the same time Arsenal were falling, Liverpool rose, and the Reds managed to stay in the race down the wire. It was ultimately Manchester City who took the title, but the race has its twists and turns.

Nothing that has happened this year suggests we'll see as interesting a title race. The only question, it seems, is whether Manchester City can keep pace with Chelsea and keep the title race at least nominally an object of concern. Arsenal have looked good, but the results have been mixed and a recent patch of injuries is likely to cost them some points. Everyone else is highly flawed.

While the top four race is more interesting, we saw no movement this weekend. Arsenal and Liverpool failed to win home matches against their rivals, but the draws meant that neither did Tottenham or Everton gain significant ground in the race. Southampton were far more impressive than Manchester United in victory, but it still looks like the same race for two slots with two favorites and four underdogs. 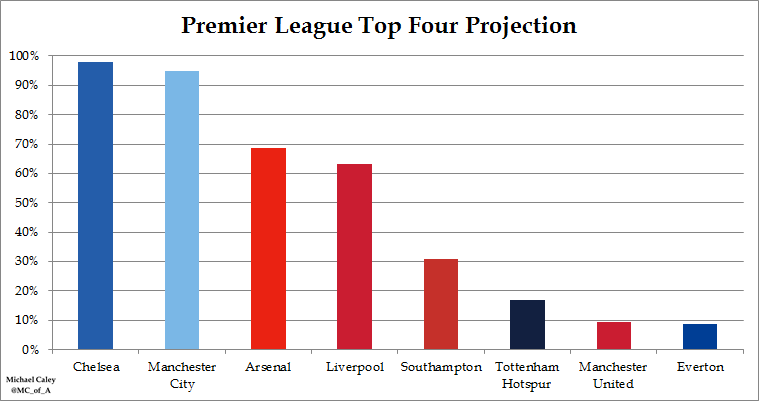 Let's Talk About The Bottom 12

I was planning on writing about why Newcastle are still not entirely in the relegation mix yet, but Sean Ingle went and wrote it up in the Guardian, so I can just link to it. Newcastle have more shots and more expected goals than their opponents despite terrible results. They clearly have more talent than almost any of the other bottom 12. If they don't start winning over the next month or two, we can revisit, but I think they should be just fine.

I argued in my early projections that West Brom would be fine, and their six-point run in the last two weeks has the Baggies looking very safe. Perhaps the oddest pick here is eight-point Leicester City in the relegation places. Their defense has been really problematic. They've allowed 40 danger zone shots in six matches, and if you keep conceding seven DZ shots per match, you will concede tons of goals. My projections started with a Championship side without an insane payroll, and they've added terrible shot performance after terrible shot performance. Leicester has attacked at speed efficiently, but without a real overhaul at the back this is not a good team.

Hull City are really struggling as well. Leicester City has a negative-20 danger zone shot difference. Hull are at negative-24. Hull has conceded 43 danger zone shots, the most in the league. If Burnley has a competitor for the terriblest team of the early season, I think it might be Hull City. QPR haven't been quite as awful, but it's notable when every observer picks a team as worst in the league. The numbers aren't quite as poor, but they're not good either.

That's what that is.