Tactics Tuesday: Mousa Dembele is not an attacking midfielder

It's obvious from his previous performances that Mousa Dembele is not an attacking midfielder. Tim Sherwood had to see for himself, anyways.

Share All sharing options for: Tactics Tuesday: Mousa Dembele is not an attacking midfielder

Sunday's match against Everton featured several of the hallmarks of Spurs under Tim Sherwood: an inexplicably slow start, far too much space between midfield and defense, and three somewhat lucky points. Tactics can't explain the outcome; Tottenham Hotspur played poorly but won thanks to some quick thinking from Kyle Walker and a terrific finish by Emmanuel Adebayor.

One new wrinkle was the deployment of Mousa Dembele as the most advanced player among a trio of central midfielders. This move was ineffective on several levels. Dembele lacks the goal scoring instincts of a second striker, as was apparent as early as the second minute, when he failed to make a run onto a good Paulinho cross behind Everton's defense:

The ability to score goals, of course, is not a prerequisite to play as the most attacking midfielder. Elite attacking midfielders tend to provide the pass to unlock a defense. Again, this is not Dembele's skill set - he tends to dwell on the ball and prefers the safe pass to the risky pass that might create a goal-scoring opportunity, which explain why he consistently has one of the highest pass completion percentages in the Premier League. His reluctance to get forward left Emmanuel Adebayor isolated, which meant Everton found it easy to win the ball back when Spurs were able to pass the ball into Adebayor's feet.

Defensively, it seems like Dembele's terrific ability in the tackle would make him the ideal player to press high up the pitch, which is what Sherwood claimed he wanted his players to do in the post-match press conference. As it turns out, Dembele's languid style is not well suited for this role - he prefers to take the ball off opposition players as they come towards him rather than to harry them in the manner of Lewis Holtby or Clint Dempsey. Sherwood could be seen throughout the first half urging Dembele to press higher and not leave Adebayor isolated, to no avail. Not coincidentally, Spurs failed to recover possession in Everton's half near as many times as they did in the first meeting between the two teams this season. 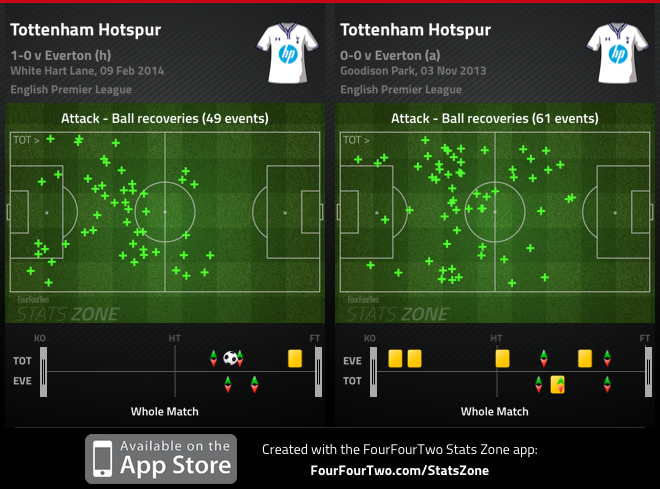 Presumably Sherwood wanted to see Dembele utilize his dribbling skills in a more advanced position, though this did not really work out during the game. Dembele's positioning as the most advanced midfielder meant that Gareth Barry and James McCarthy did not allow Dembele to dribble at a defender in a 1-v-1 situation.

While Sherwood deserves some credit for instructing Paulinho and Dembele to switch roles in the second half, it's puzzling that he asked Dembele to play the most attacking role in the first place. Dembele played that role in a few games early in the season and Spurs suffered from the exact same problems as they did in the Everton match. Whether Sherwood persists with playing Dembele in this role will be telling of his ability to learn from past experiences.