The following sortable tables contain advanced shot statistics for the 2015-2016 English Premier League. They are updated at semi-regular intervals. For definitions, see the Glossary below. For statistics from other European leagues, see the advanced statistics page for La Liga, Bundesliga and Serie A.

Updated through matches of May 2. All data provided by Opta.

The shot locations are based on my Shot Matrix shot locations, the map is displayed to the right. Penalties are not included in shots. 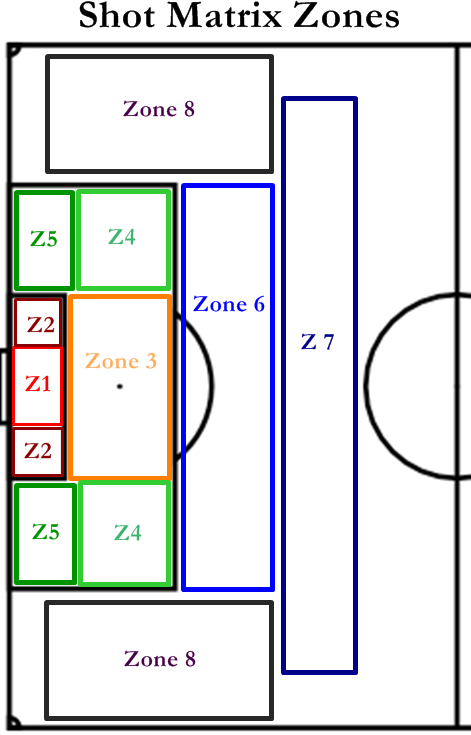 DZS: Shots from the danger zone, which is zones 1-3, the close and central areas of the box.

%Cross: Percentage of shots from the danger zone assisted by crosses.

%TB: Percentage of shots from zones 1-5 assisted by through-balls.

DZ Pass: Shots assisted by passes in or around the danger zone.

Est. Poss.: Shot attempted from established possession in the opposition half

NPG: Goals not from penalties or from own goals. (xG is meant to nearly sum to NPG, but it does not quite because (a) the fit isn't exactly perfect and (b) xG deprecates shots off rebounds and only counts for a team one shot from every attacking move.)

xG: Expected goals scored or conceded based on shot type, assist type and shot location, speed of attack and a few more factors. For the explanation of the components of xG, see my full open-method expected goals methodology.

Expected goals here does not sum to the same total as goals, because it excludes penalties and own goals, as well as deprecating the value of chances off rebounds.

A disclaimer on xG: These are not meant to be definitive. I have published the component numbers precisely so that you can make your own judgments. The game of football is irreducibly complex, and I do not mean to suggest I have finally reduced it to a single number. But I think xG, even if this simple form, remains a useful and interesting figure. I will be working to improve my xG statistics (in a fully open way) over the next several months.