I've been collecting data from across Europe, and I now have a shot matrix database for the "big four" leagues in Europe. This is my first presentation of that data, on the tendencies toward certain shot locations and types in the big four leagues.

Has the globalization of football ended national distinctiveness? Has the money in football flattened out the differences between countries and between leagues? It's one of the questions I thought would be interesting to consider once I got data on the European leagues.

My hypothesis was that the differences have always been smaller than they've been stereotyped, and further that the newness of football's globalization can be overstated. Scholars of football history like Jonathan Wilson have shown, for instance, how the distinctive styles of Argentina and Brazil were both crucially shaped by Hungarian and Austrian coaches, many of them Jewish refugees. The vaunted tiki-taka of today's Spanish team has its roots in innovations developed in the Netherlands and Russia. It's always been the case that people have been travelling and discussing and taking on new contracts around the world.

At the same time, you can't watch a match in La Liga or Serie A without noticing some differences in the style of play. So while the world was never a perfectly nationalist place, it also hasn't been flattened out into a football monoculture either.

In this article, I want to consider the distribution of shots taken in the four major European leagues. I think that shot distributions can tell us quite a bit about styles of play. The total number of shots taken tells us about the pace of play. The different rates of shots taken from inside or outside the box tells us about how direct the style of football might be, the rates of shots off crosses or through-balls tells about its width. These aren't the only markers of league difference, but they are a telling and significant set.

The Pace of Play

Just first of all, how many shots gets taken? One often hears about the rugged and swashbuckling style of the English Premier League, and how players moving to English need to get used to its pace. I find that there is something to this stereotype, though perhaps less than might be initially expected. 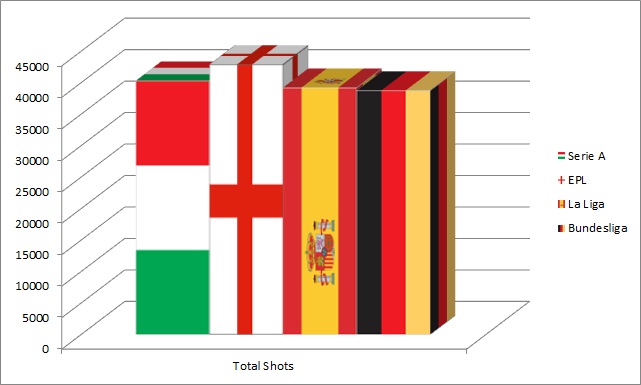 From the 2009-2010 season through the 2012-2013 season, there were about 43000 shots taken in English Premier League matches compared to about 40000 in matches in Serie A and La Liga. There were only about 31000 taken in Bundesliga matches, but this is because with 18 clubs in the German first division compared to 20 in the other major leagues, there are about 20% fewer games played in a single Bundesliga season. So in these graphs, I have normalized the German totals to the same scale as the other leagues.

This means that the EPL is "faster" in the rate of shots taken. It's not the hugest difference, though, as the bar graph hopefully shows. We're looking at maybe 7-8% more shots taken in an EPL match. That's not a difference you'd notice in watching a single game, though over a four-season sample it adds up. It's real, but it can be overstated.

(As a note, in the body of this article, I'm going to be displaying the data mostly visually. For people who like raw numbers, you can scroll down to the bottom for sortable tables with the underlying numbers.)

So there are more shots taken in English Premier League matches. Are they taken from the same places? The English stereotype is of a certain directness in play, a tendency to get to the face of the goal for a shot, while players in the continental leagues take more time to produce different sorts of chances. This is yet another stereotype I sadly can't bust. But unlike with shot pace, where the variance was not that large, we see very real and significant differences in shot location across the European leagues.

The following graph lays out the numbers, as well as my shot zones. I have divided shots taken into six basic zones, as laid out in my first shot matrix article. The map of the eighteen-yard box in the graph below marks out the zones in colored boxes. The two red zones are zones 1 and 2, within the six-yard box. The orange zone (3) is the eighteen-yard box central. The two green zones are the wide areas of the 18-yard box, splitting tight-angle shots from near the endline (zone 5) from other wide shots (zone 4). Zone 6, then, is all shots from outside the box

You can click on the image to see it full size. I know there's a lot of data there to break down. Let's start with the red zones at the bottom—this is where the English directness shows through. There are nearly 50% more shots taken from the central area of the six-yard box in EPL matches than in matches in the other leagues. Zones 2 and 3 (the six-yard box with and the eighteen-yard box central) see a continued trend of more EPL shots, but not to the extremes of zone 1. 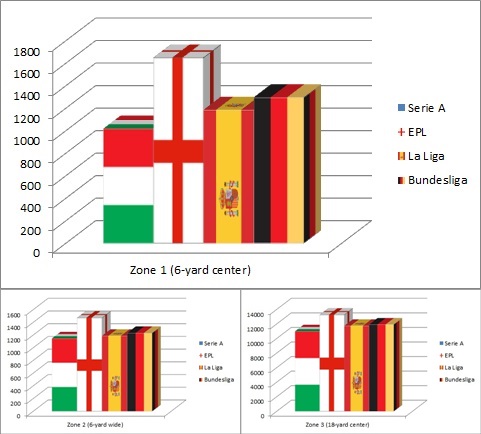 The primary driver of England's shot total, compared to the other largest continental leagues, is shots taken from the danger zone. That's the old English directness right there.

Now, you might be wondering at this point, if there are so many shots taken in EPL matches, and these shots are generally taken from good (even great) locations, why aren't there more goals scored in the Premier League? Good question! My third piece later this week will address the conversion disparity and offer a few possible explanations. 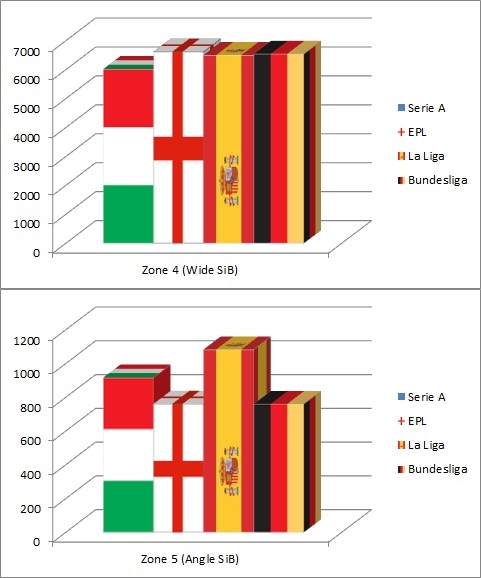 There are a little more than 33% more shots taken from tight angles in Spanish league matches than English or German. Italy falls in between. I'm not quite sure how to characterize this difference. Shots from zone 5 are not usually high-quality shots, but that depends a lot on context. I guess you could say that it takes a more skillful touch to finish from a difficult angle, and so this could fit with a general idea that ball control skills are greater in the Spanish and Italian leagues. But honestly I don't have a great explanation and would be fascinated to hear your hypotheses.

Finally for shot distribution, there's the rate of shots taken from outside the box. Here we see most clearly the distinctiveness of Serie A football. The best way to see this, I think, is with a pie chart. For the most part, the differences I've laid out between the leagues don't appear as obviously in this chart, but the massive tendency in Italian football to shoot from outside the box is obvious. 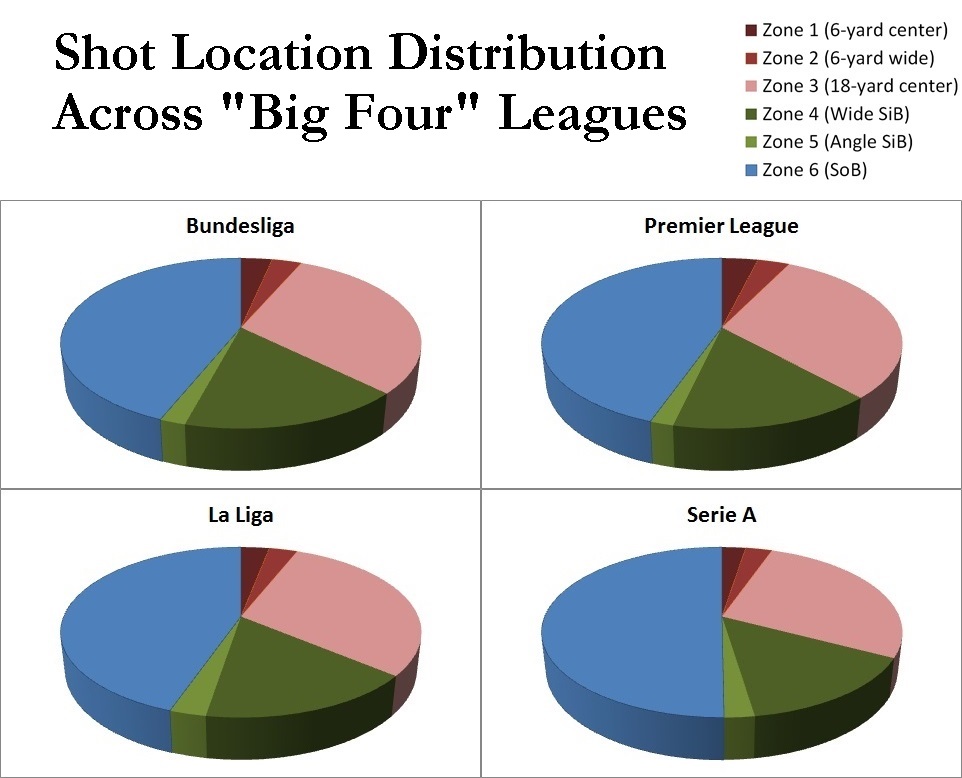 In fact, when we look at the overall numbers in a table, the lack of directness in football in Serie A stands out. The Italian league features notably fewer shots from the danger zone than any of the other leagues as well as more shots from outside the box. I do wonder a little bit if Andre Villas-Boas might find Serie A to be a congenial place to ply his brand of distance shooting, slightly slower-paced attacking football.

One of the big money questions in football analysis is league translation. Is there a way to identify in advance which players will be just as good in Spain as they were in Germany, which players will do best to stay in Italy rather than take a job abroad in England? If analytics could answer this question, even in a provisional way, it would be a tremendously valuable insight.

I don't have an answer, not right now. But I think that investigating league differences is the first step. If we know that English football features lots of shots from close range, does that mean that a Spanish striker whose shots are almost all from close range will be more or less likely to be effective after transferring to North London? If we know that there are lots of shots taken from outside the box in Italy, should we expect a player from Serie A who likewise tends toward long-distance shooting to struggle to fit in with an English club? I don't think the answers to any of these questions will be simple, but identifying league differences is the first step to working out a good League Translation methodology.

Obviously there is more to league differences than just shot location. In my next two pieces, I'll address two further types of difference. First, I'll look at shot and pass type differences, how many shots are headers, or assisted by crosses. Second, I'll look at shot conversion differences and offer some hypotheses for why so many fewer Premier League shots are converted to goals than shots in the other leagues. (I'm hopeful than adjusting for conversion rates might be a good way in to the money question of league translations.)

Here's the data from above, in a tabular format. As you can see, Italy really starts to stand out when you break the numbers down by percentages. They take low-quality shots in Italy. Although they convert quite a few more of them, so perhaps they're not so low-quality in context. But there I go getting ahead of myself. More to come later this week.

And here's the same data, in percentages.