In my first article, I considered the differences between the major European leagues in the rate of shots taken from different locations on the pitch. Now I turn to the types of shots taken, both how the ball is struck and the type of pass which assists it.

Yesterday I showed that significant differences still exist between the major European leagues which can be seen in the rates of shots taken from different areas of the pitch. Today I want to break these numbers down further according to shot type and pass type. In my second and third shot matrix articles, I analyzed differences in shot type (whether a shot is headed or struck with the foot) and pass type (whether a shot is assisted by a cross or a through-ball). I found very significant differences in shot conversion based on these numbers.

As an example of the importance of these differences, these are the conversion rates for shots taken from Zone 3, the central area of the 18-yard box. 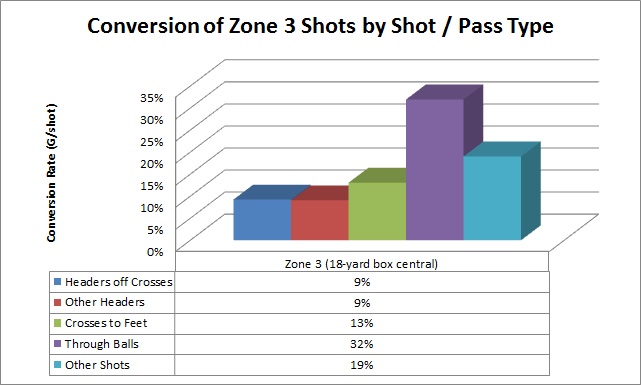 The conversion rate of shots off through-balls is over three times that of headers assisted by crosses. Shots off crosses into feet are nearly 50% more likely to result in goals that shots off headers, but 50% less likely to be scored than regular shots from this zone. In my next piece, I will break down some important differences in goal conversion between the different European leagues. I present this data at the outset simply to show that shot type and pass type matter, quite a bit, to goal scoring.

A Little Bit of Mythbusting

I was hoping to get to do more mythbusting in this series, but so far the data has fit reasonably well with a lot of the stereotypes fans have regarding the different European leagues. Here's an exception. I have joked previously about the "header off a cross" shot type, that the increase in headers off crosses in Tottenham Hotspur matches recently reflects the hiring of an English coach. A wide man pinging in a cross to a right big bloke in the center, that's a good English goal.

But in fact, the percentage of headed shots assisted by crosses is nearly constant across the big four European leagues. 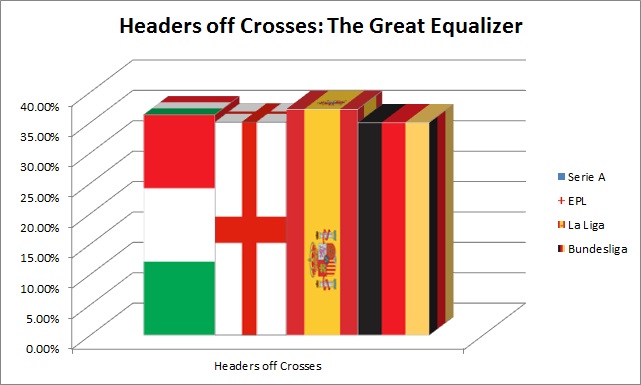 The range runs all the way from 35% of danger zone attempts being headed shots assisted by crosses in England and Germany, up to 36% in Italy and 37% in Spain. Everyone understands that it's easier to get deep in wide areas, and it's hard to thread a low ball into the center from wide. And so everyone understands that sometimes, it is a good idea to knock them crosses in and see if your striker can do something with 'em.

Other Shot and Pass Differences: Where are the German through-balls?

I found significant league differences in three other major shot types I can track in my data. The most striking thing is the peculiarity of the Bunderliga data, especially for headed shots not assisted by crosses and shots assisted by through-balls. Here's first a graphic combining the league differences on multiple different kinds of shots. 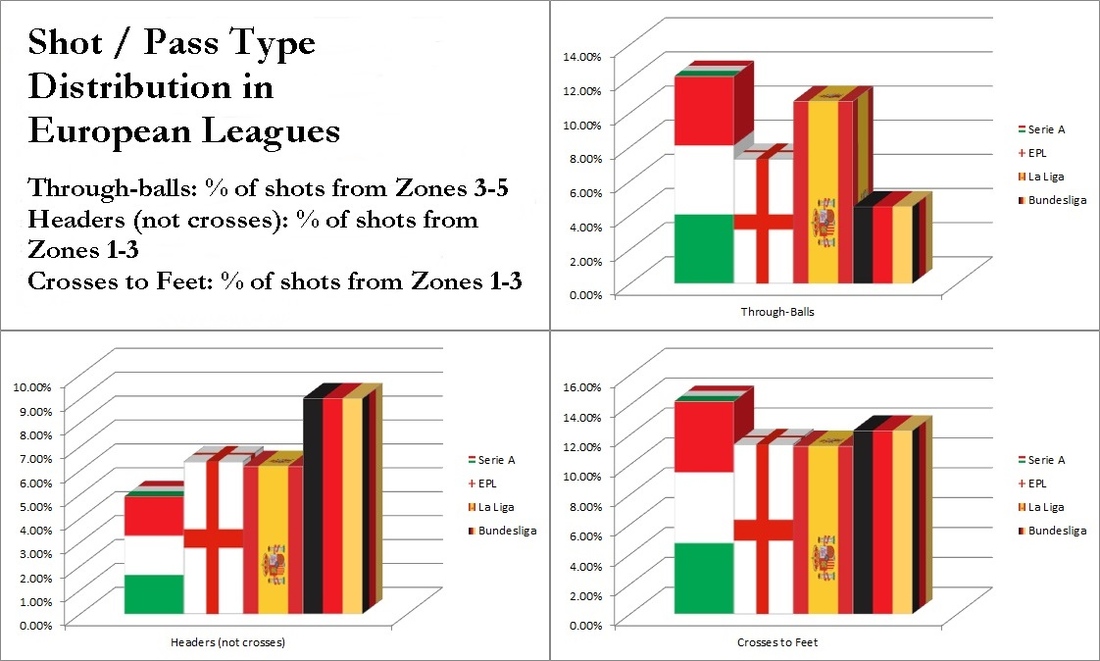 I had not expected the Bundesliga to be so distinctive when I started this project. I guess part of the problem is that I watch Bundesliga matches only very infrequently—GolTV is more of an elaborate prank than a television channel—but still. They attempt shockingly few shots off through-balls in German league matches, and there are a ton of headed shots attempted either off rebounds or lofted passes.

I would really like to know if these numbers are plausible to folks who know the German game.

Honestly, the numbers surprise me enough that I wonder if what I'm finding is a difference in coding rather than in play. If Opta has coded passes as through-balls according to stricter rules in German league games, something like the above graph could be a result. Likewise with other headers—if there is a stricter limitation of what makes a cross, then perhaps a chunk of shots which would be classified as headers off crosses in another league don't get logged as such for the Bundesliga. But maybe not. Maybe this really is how they play in Germany. Let me know.

Breaking Down Those Italian Crosses

As I was collecting this information, I asked some of the other CFC writers what they might hypothesize as league differences to look for. The first thing Kevin McCauley mentioned was the prevalence of crosses into feet in Italian football. And damn if he wasn't spot on. So in contrast to my worries about the Bundesliga data, this provides a nice pre-confirmation that I'm seeing something entirely real in the rate of shots of crosses into feet in Italian league matches. I think it's interesting to break this down a little bit further because there is some important variation in the conversion rate of shots off crosses.

In general, it's harder to score a shot assisted by a cross. This is hardly surprising, as crossed balls need to be redirected quickly. That takes skill, and it takes a bit of good fortune. It is not entirely an iron law, however, the shots off crosses are always of a lower value than other shots. This breaks down in my zone 2, the wide areas of the six-yard box.

As I showed in the chart above, shots off crosses in Zone 3, the eighteen-yard box central, are scored about 50% less often than regular shots from that zone are. They are inferior by a similar rate in Zone 1, the six-yard box central. However, in Zone 2, shots from crosses into feet are scored at a slightly higher rate (21% to 20%). I think this makes sense, as these shots are likely to be either early or late connections with crosses fizzed across the face of goal. Either way, whether the attacker gets to the cross a bit before it crosses the goal mouth or if the ball finds its way to an attacker just past the goal, the defense and the keeper are not likely to be in good position to stop the shot.

And indeed, the zone-by-zone breakdown fits. It's in Zone 2 that Serie A is most distinctive in the number of shots off low crosses. 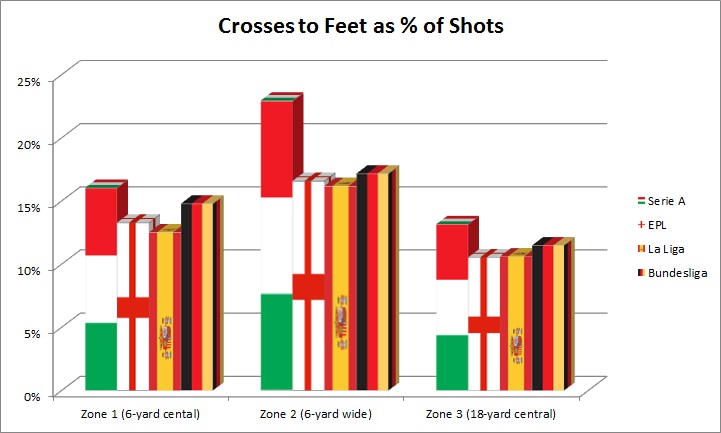 The tendency to take more shots off crosses into feet in Serie A is most notable in Zone 2. So in Italian football, they maximize in particular the best form of these shots. That's kind of cool.

I didn't find anything as remarkable in breaking down shots off through-balls or headed shots not off crosses. The distinctive German tendency to attempt headed shots does not appear in the Zone 1 data. This makes sense, as I figure pretty much anyone who happened to be within heading range in the central area of the six-yard box would take the shot. So we see no real differences there. It's from wider and deeper areas where the Bundesliga's rate of headed shots becomes most notable.

With through-balls, the statistics are pretty consistent. In each of zones 3, 4 and 5 there are rather more shots off through-balls as a percentage of total shots in Italy, followed by Spain, then England and finally Germany.

The zone-by-zone breakdown doesn't teach us much. But the broader point here is that shots assisted by through-balls are attempted at massively differing rates. These tend to be extremely high-quality shots, converted at rates double or more regular shots from the same area. A successful through-ball by definition splits the defense and leaves an attacking player in space. We should expect higher rates of shot conversion in leagues where these sorts of attempts are more prevalent.

And for y'all nerds who just want raw numbers, these are the shot totals on which the graphs above are based.