Tactics Tuesday: Character has nothing to do with it

Tim Sherwood's failure to match personnel with tactics left Spurs with little chance of pulling a surprise upset at Chelsea.

Share All sharing options for: Tactics Tuesday: Character has nothing to do with it

Chelsea had no trouble dispatching Spurs thanks to some awful individual errors and incoherent tactics from Spurs.

Jose Mourinho initially made a single change to the side the defeated Fulham last weekend, bringing in Frank Lampard for Oscar, who played for Brazil in South Africa midweek. An injury to Fernando Torres in the warm-up forced Mourinho to replace him with Samuel Eto'o.

Before diving into the tactics, it must be noted that three of the four goals conceded by Spurs were the result of egregious individual errors by Jan Vertonghen, Kyle Walker, and Sandro. The fourth, of course, resulted from a dubious penalty awarded by Michael Oliver. It's difficult to see Spurs winnng any game after making so many errors and being the victim of a poor penalty decision, let alone a game against the league leaders.

Even so, the narrative that Spurs were "in it" before the first two Chelsea goals or that they "capitulated" afterward is not backed by evidence. Spurs were second best from the game's opening minute until the final whistle and the red card, dubious or not, only exacerbated already existing problems within the Spurs set up.

Divergence between Spurs personnel and tactics 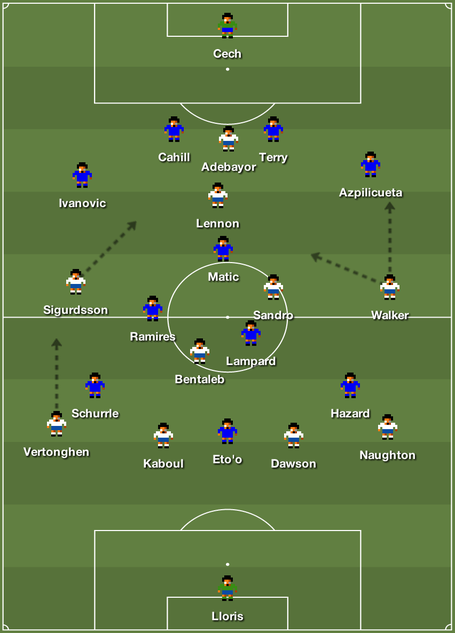 When the line-ups were announced prior to the game, it seemed obvious how Tottenham would approach the game; Sigurdsson would play behind Adebayor with Walker and Lennon on the flanks, protecting the fullbacks. With a lack of creative players (aside from Adebayor), logic dictated that Spurs would be to stay compact and sit deep when out of possession before swiftly breaking through their pacy wingers when possession was regained.

Of course, Sherwood being the Honey Badger/#YOMO manager that he is, logic did not make an appearance. Sigurdsson played on the left while Lennon sat behind Adebayor, a position he's never played before. Instead of ceding possession, Spurs dominated it. Rather than sit deep and counter attack, Spurs played with an absurdly high line, only without the on-the-ball pressure needed to make it work.

This fundamental misalignment of personnel and tactics was the story of the game, tactically speaking. Taken in isolation, there's nothing wrong with the personnel chosen, dominating possession, or playing with a high line. But the key to successful strategy is employing personnel and tactics that work well together. This explains why, for example, the high line Spurs used under Andre Villas-Boas was really effective with Lloris in goal but resulted in comedy when Brad Friedel took his place.

It's unclear what Sherwood was thinking and whether he intended to dominate possession or play a high line. What is clear, however, was that Spurs personnel and tactics combined to make it a remarkably easy night for Chelsea.

Predictably, the aforementioned lack of creative players and positional familiarity meant that Spurs had trouble carving out threatening chances. In the below freeze-frame, Spurs have an opportunity on when Vertonghen finds Adebayor on the left flank. The move breaks down as no one moves into the gaping hole in front of Chelsea's backline and Chelsea are able to reset their defensive shape. 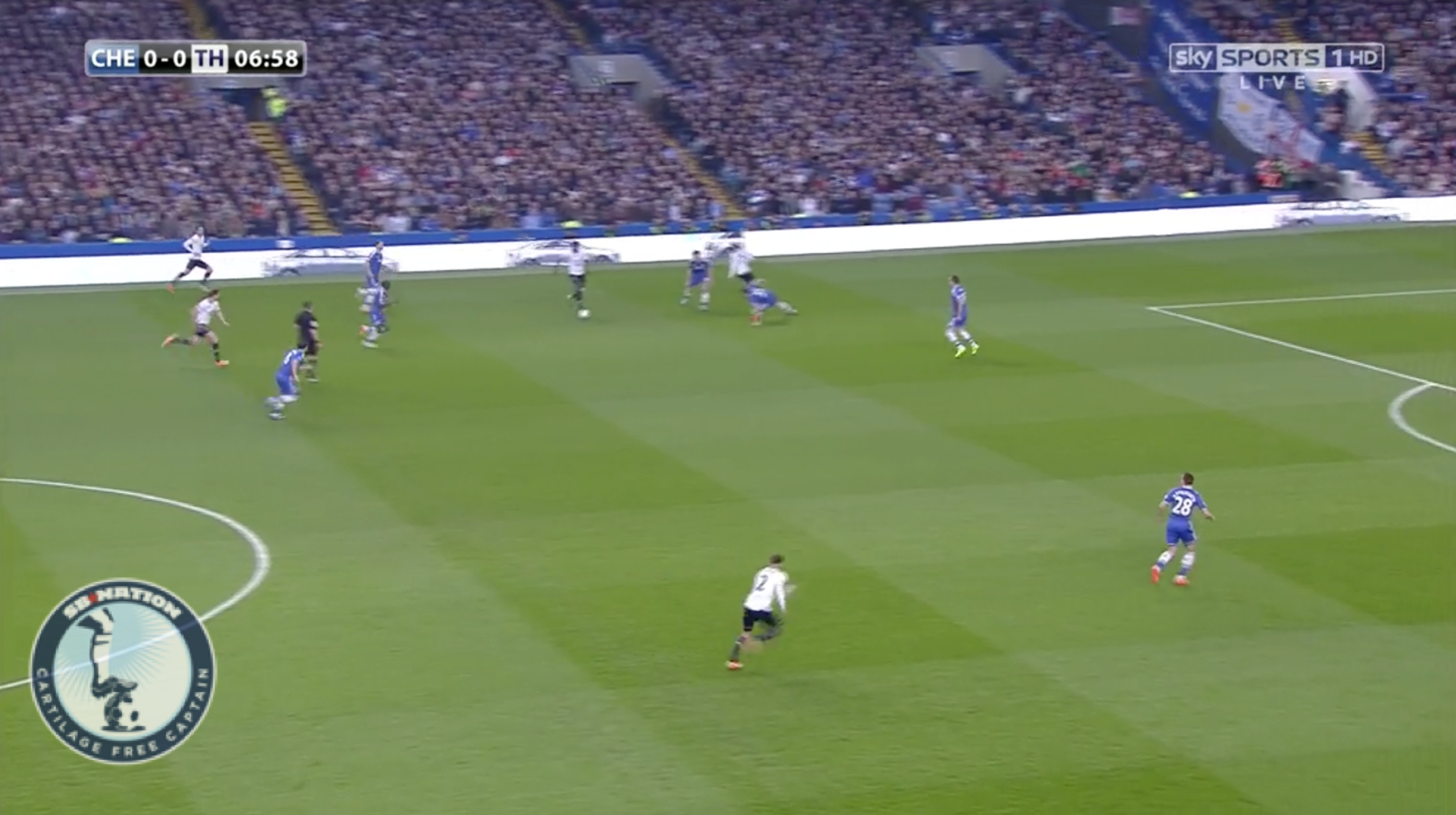 There's no point in apportioning blame for this particular failure to individual players, mostly because it's entirely unsurprising that players who lack positional familiarity or chemistry with their teammates would not know the correct runs to make.

Well-drilled attacking teams instinctively know how to utilize space to create goal scoring opportunities, interchanging positions seamlessly to create chances. This sort of chemistry and understanding was never even remotely apparent among Spurs players on Saturday. The best chance that Spurs created occurred when an Adebayor flick-on found Nabil Bentaleb, who dragged wide. Aside from that opportunity, and a Sandro snapshot from outside the box, Spurs created nothing of note in perhaps the worst attacking performance by a top-7 side this season.

Post-match, Mourinho admitted that Spurs did not "scare" Chelsea and that his team could simply wait for a chance to materialize. They did not have to wait long, getting into one-on-one situations with keeper Hugo Lloris twice in the game's first four minutes as Spurs suffered through yet another slow start under Sherwood. Spurs were let off the hook in the first instance by an incorrect offsides call and in the second by Eden Hazard dragging wide when faced with an open goal.

Chelsea's profligacy saved Spurs again midway through the first half when Samuel Eto'o failed to play Andre Schürrle through on goal.

As an aside, this is a (very simple) example of the types of attacking movements good teams can practice and that Spurs have so often lacked this year. Schurrle intelligently curves his run, making life difficult for the isolated Younes Kaboul, and only Eto'o's selfishness prevents another one-on-one opportunity for Chelsea.

In short, even before Vertonghen's calamitous backpass or Kaboul's red card, Spurs played quite poorly. With an impotent attack, Spurs' only chance of success lay in making it difficult for Chelsea by keeping compact at the back. That Chelsea had three opportunities to go one-on-one with Lloris speaks to just how badly Spurs failed at this task.

Aside from the above, Tim Sherwood made a few other tactical decisions that left me scratching my head:

Positioning of Sandro and Bentaleb. Sherwood famously does not like pure defensive midfielders and, true to form, had Sandro positioned very high up the pitch. Bentaleb was typically the deeper of the two and he struggled with the role. From that position, he picked up a yellow card in the ninth minute in making a tactical foul to prevent a breakaway and he was also responsible for the bad giveaway depicted on the GIF of Eto'o and Schürrle above. On Saturday's evidence, Sherwood would do well to look to his idol for instruction how to respond to Sandro's forays upfield.

Lack of non-enforced substitutions. Dr. Bret Myers has done research that indicates that a manager whose team is trailing should make early substitutions to ensure the best chance of getting back into the game. Collin Trainor, meanwhile, has shown that substitutes are significantly more likely to score than the starters they replace. It would be cool if Sherwood got acquainted with this research, because he often seems to forget he can make substitutions.

As in the match against Norwich, Sherwood waited too long on Saturday to make any substitutes and failed to use all the substitutes available to him, despite the fact that most of the team was exhausted from playing with a man down for the last half hour of the game.

Reorganization after the red card. Sherwood's reorganization after Kaboul's sending off was about as strange as it gets. The sensible option would be to shift Vertonghen to center back to replace Kaboul, move Kyle Naughton to left back, drop Kyle Walker to right back, and then sub on a new player as needed. Andros Townsend could have been a good choice; given that Spurs were likely to see less of the ball, Townsend's ability to pick up the ball and run at Chelsea's defense without much support would have been very useful.

Instead, Sherwood had Sandro drop into central defense and Paulinho come on take his place in midfield. Kyle Walker, meanwhile, played something of a shuttler role, flitting between the right flank and central midfield. This change left Spurs' best midfielder at center back, best right back at right wing (or central midfield, depending on the particular minute), and best centerback at left back. Though it's unclear whether Walker's and Sandro's unfamiliarity with their respective positions played a part in the third and fourth goals, it's hardly surprising that Spurs' defensive solidity nor offensive cohesion improved during the games final half hour.

Post-match, Sherwood asserted that Spurs were in control up until it all fell apart after Kaboul's dismissal, at which point they capitulated due to a lack of character. After reviewing the match closely, it's hard to reconcile that statement with reality. Spurs barely threatened Chelsea and were repeatedly opened up at the back in the game's opening hour. After the sending off, a bizarre reorganization left several players out of position, leading to more difficulties. Rather than focusing on his team's character, Sherwood would do well to spend a bit more time considering their tactics.