Breaking Down the Top Four and Relegation Races: I'm telling you there's a chance

Share All sharing options for: Breaking Down the Top Four and Relegation Races: I'm telling you there's a chance

Earlier I went through the Premier League title race in some detail, looking at what sorts of results Chelsea, Liverpool and Manchester City need in order to win the league this season. In this piece, I want to do the same thing for the top four and relegation races. Spoiler: Tottenham remain technically not eliminated.

Arsenal are currently one point ahead of Everton, with 64 points to the Toffees' 63. Everton have a game in hand, but this advantage is not quite all it's cracked up to be. Here are the clubs' remaining schedules for the season:

Everton have three matches (home to Manchester City and Manchester United, at Southampton) that are tougher than Arsenal's worst match in the run-in (at Hull City). Oh, and Everton close the season at the KC themselves. In my most recent projections, I have Arsenal averaging about 10 points from their next 5 (2 ppg) and Everton averaging about 9 from their next 6 (1.5 ppg). So Arsenal's schedule is roughly 33% easier than Everton's. That's a big deal.

That's why, despite Everton having the game in hand and despite their resounding win at Goodison Park on Sunday, I do not rate the Toffees as the leader in the race for fourth place. I have Arsenal nearly twice as likely to take the top position at 62% to Everton's 34%. I'll get to those missing four percentage points below.

First, let's look at the projection graphs for Arsenal and Everton. The following chart gives you the numbers. I have the odds of Arsenal finishing on each possible point total, and I've color-coded the bars based on their chance of finishing top four at that points total. 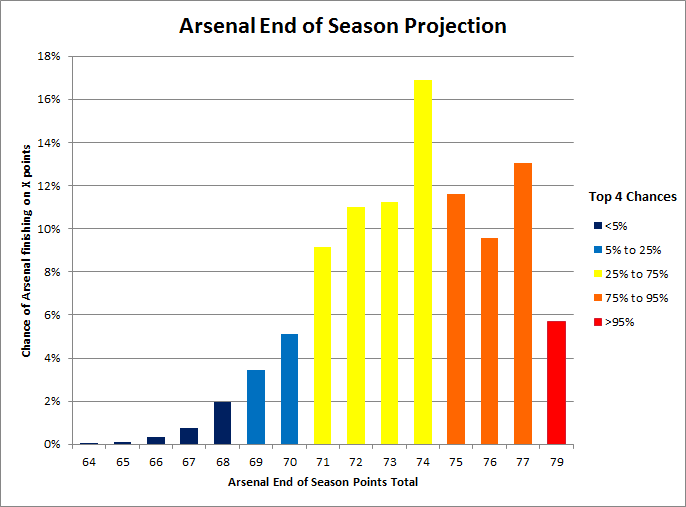 I have 75 points as roughly the magic number for Arsenal. That would take three wins and two draws from their next five, which certainly seems doable in the abstract. You note how the higher bars cluster toward the end of the distribution. With such an easy final set of matches, Arsenal stand a very good chance of running the table, and that would nearly guarantee the Gunners a place in the Champions League playoffs next year.

With Everton, by contract, the bars cluster toward the middle of the distribution. It would take a truly magnificent hot streak for the Merseysiders to avoid dropping points to both Manchester giants and away to Southampton. If they can do it, though, Everton would be in fantastic shape for a top four finish. 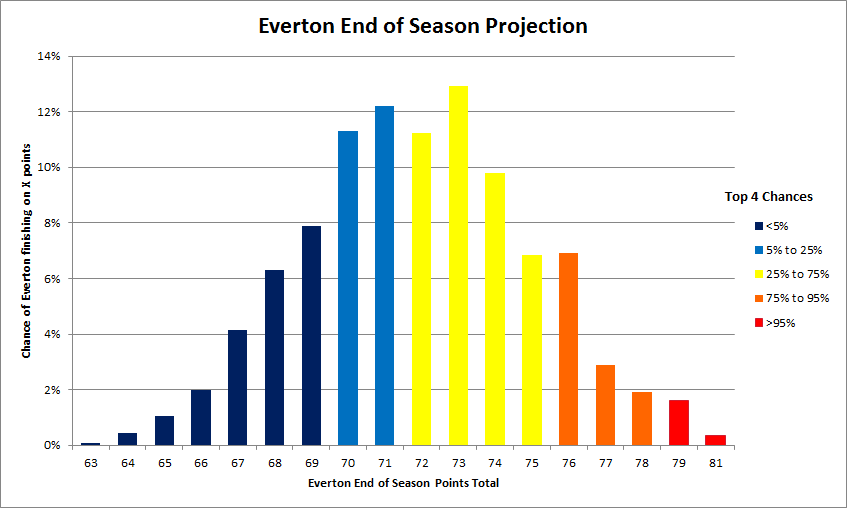 This graph gets at the problem with analysis which prioritizes "having control of your own destiny." Everton finish fourth (or higher) if they win all six remaining matches. But I would much rather have Arsenal's end of season schedule even though they do not "control their own destiny."

What this shows is that the analysis is based upon an important fallacy. No one, anywhere, controls their own destiny. We are not Randian superfolk bending reality to our will. We all live in society, and we are all both agents of our own action and patients to the action of others. There is something necessarily precarious about human existence, and while this implies real and unpredictable risk is an indissociable part of our lives, it is also our dependence on others that makes us human, that enables all of the great things that people can do. Or put differently, "controlling your own destiny" is a load of bollocks.

And this analysis applies to football teams as much as anyone. Everton do not control their own destiny because their chances of winning at St. Mary's in three weeks do not depend only on the Everton players. It also matters deeply how well Southampton play. And since Southampton are a both better than Newcastle and have home field advantage in their match, Everton are more likely to drop points that week than Arsenal.

That said, Everton do have one advantage. I ran a million simulations of the remaining season for this piece, and in 999998 of them, one of Liverpool, Chelsea or Manchester City won the Premier League title. In the other two it was Everton on 81 points. So there's chance.

There's also a chance of an upset. Both Manchester United and Tottenham Hotspur did not merely win over the weekend, but they dominated. I rate Spurs' win over Sunderland as the third most dominant performance of the EPL season with an expected goals score of 3.4 to 0.4. These wins, combined with Arsenal's loss, opened up a very small window for a very big upset. I have Spurs at about 3% to finish top four and Manchester United at around 1%.

Here are the end of season projection graphs for Spurs and United. As you'll see, for both clubs it basically necessary to run the table and then also get some help from the teams above. 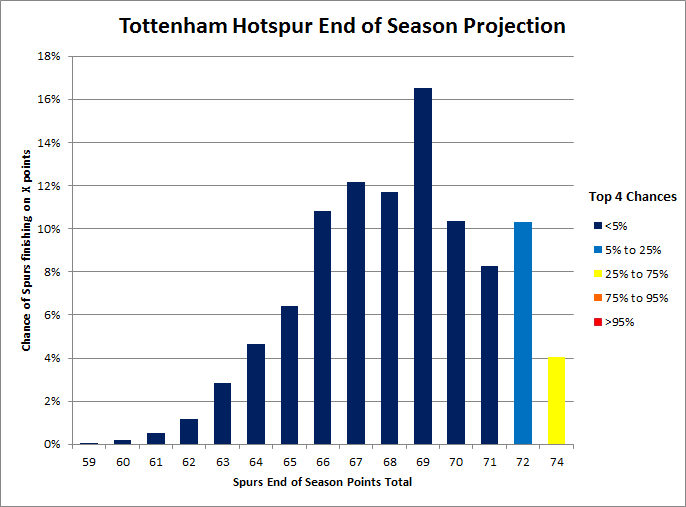 Tottenham get up to about 30% for fourth place if they win all five matches. 74 points is no kind of guarantee of a top four finish, but it's the only chance the club has. Any dropped points put the miracle out of reach, and a loss seals it entirely. 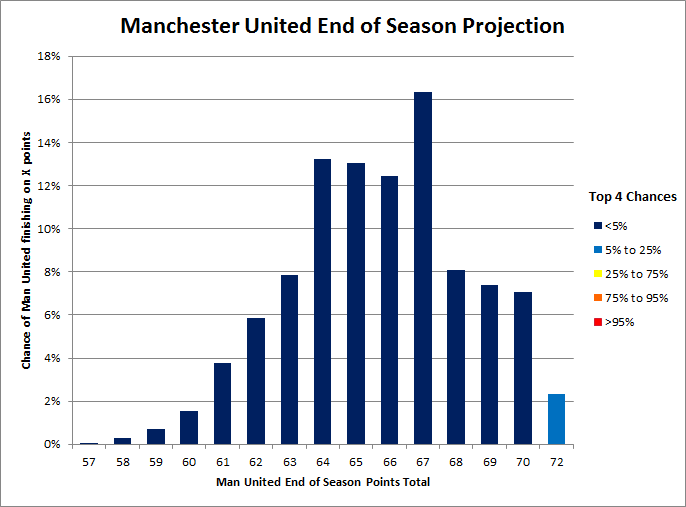 Since United have a maximum point total of 72, their chances are even slimmer. But at 72 points, having necessarily taken three off Everton at Goodison, United would be around 1-in-5 to finish fourth. So they likewise have a chance.

The English Premier League relegation fight is down to four sides. Cardiff City, Sunderland and Fulham are the most likely three to be relegated. If one of them can fight their way out of the bottom, it is very likely that Norwich City will be the club to fall. Norwich at 32 points currently have a huge five-point cushion about the bottom three (who stand on 25, 26 and 27 points), but they have an absolute killer of a schedule.

Fulham and Cardiff have it the easiest on average of the relegation battlers, while Sunderland have an extra two matches to try to make up ground. The problem for all of these clubs is that if they were good enough to win the matches they need, they would not be in this position in the first place.

My projections currently break the relegation race down as follows. Cardiff City are near-certain to drop at 97 percent. Following them in quite bad shape are Sunderland at 87 percent Fulham at 82 percent. The remainder falls on Norwich City at 27 percent. No other EPL side is over a 1-in-50 shot at relegation. (I will treat those other sides at the end of the piece, with a quick run through their magic numbers. Which are very low.) 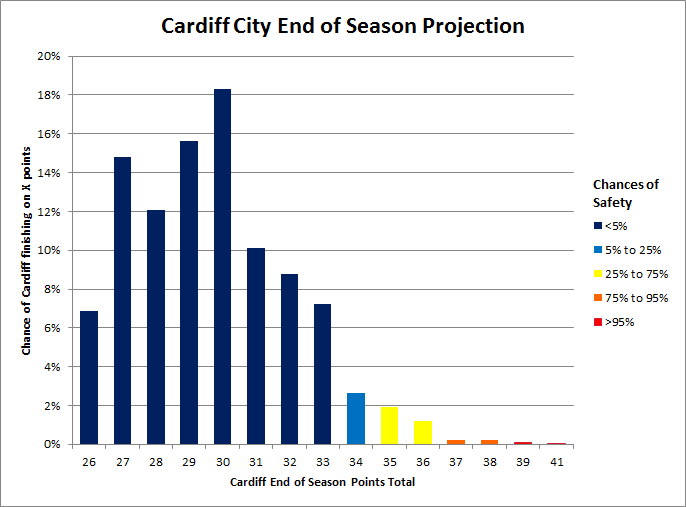 Cardiff need nine or ten points from their final five matches to get to that relative safety zone of 35 or 36 points. As you can see by the clustering of higher bars to the left of the chart, my projections are extremely skeptical that the Bluebirds can do that. This is what relegation looks like. 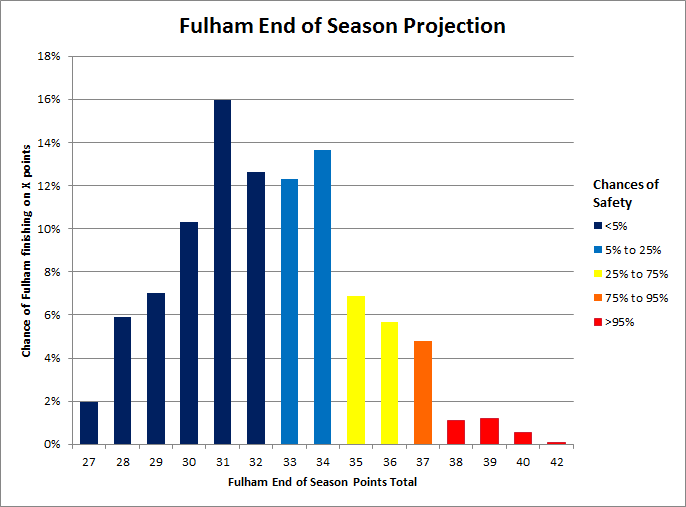 Fulham, by contrast, have a slightly easier task and a little more visible yellow and red in the chart. Fulham have three home matches to Cardiff's two, and they have this weekend's clash with Norwich on the friendly ground of Craven Cottage. Once again 35 or 36 points means Fulham have a chance, at with 37 points they can probably start planning for another season in the top flight. 37 points would require three wins and a draw from their final five matches, which is a huge ask, but my stats rate those chance as not entirely nil. 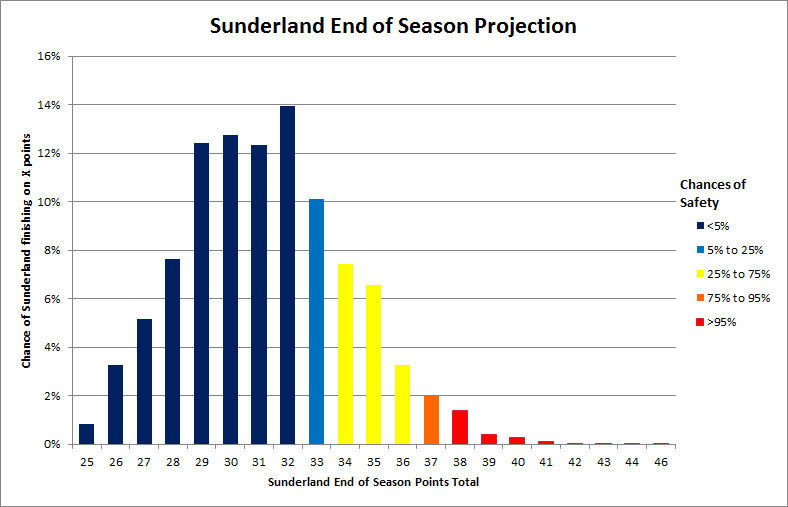 Sunderland have a ton of matches, but one of their make-up games is a pretty much guaranteed loss at the Etihad, and they've also got Everton, Chelsea and Man United on the docket. They were dire at White Hart Lane over the weekend, but they have a lot of opportunities to get better. As you can see from those four high bars at 29 through 32 points, my projections expect the Black Cats to fall short. 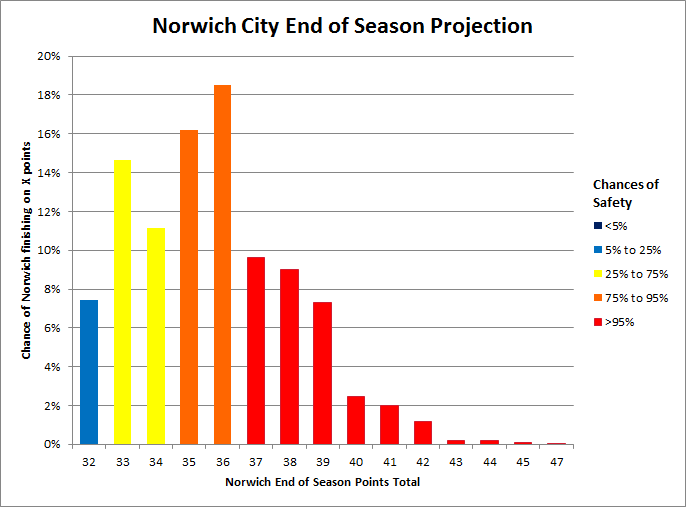 I just think this one is kind of funny. All Norwich City have to do is win one match. One match. I was writing above that Fulham need to win three. Norwich with one victory are in really good shape. The reason they're in the relegation scrape is that there's a roughly one-in-three chance that the Canaries don't win another game over the rest of the season. If they don't win away to Fulham this weekend, it's a crucible of high-payroll top four or title-contending sides after that with no respite. There's a lot of orange and red on this graph, but Norwich City still aren't safe.

One theoretical question you may have is why Norwich City have a better chance of safety at 35 points than any of the sides behind them. If you look at the top four race, you'll see that both Arsenal and Everton have better shots at fourth place with 72 points than either Spurs or United. The reason is the same. Fulham not only need to get to 35 points, they need the teams ahead of them not to get to 35 points. It's much more likely that teams with more points right now will end up reaching those milestones, so it's tougher for the teams behind to win even if they do go on a solid winning streak.

I don't need to run the rest of the graphs for the relegation race. They all look like Norwich's except without the heavy clustering of bars on the far left of the graph. If you have one you want to see, let me know and I can post it. For now, these are magic numbers for each of the sides still under 37 points in the table. How many points do they need to win in order to get their chances at safety over 95% and over 99%? In every case, it's not many.

For Villa, Hull and Crystal Palace one win does the trick to basically guarantee safety. For West Brom and Swansea, it's two wins. The only sides really in trouble if they fail to notch a win are Swansea and West Brom. I don't expect to see any of these clubs in the bottom three at the end of the season.

As much as I love data tables, eight tables with 20 rows each seems like overkill. I'll just do Arsenal, Everton and Spurs. If people are interested in a particular table, I can throw that up on request.

See, 30%? That's a chance. All they have to do is play really really good football and get a few breaks.