Premier League projections: Title and relegation on the line

Also Spurs are playing. And it's not technically over.

Share All sharing options for: Premier League projections: Title and relegation on the line

It's all coming down to this weekend. Manchester City travel to Anfield for a match that may well crown the Premier League champion. Fulham host Norwich City in a match that will determine the shape of the relegation race. And Tottenham Hotpsur travel to the West Midlands for a contest that still technically matters for the top four race.

I looked at these races in broader perspective earlier in the week. See this piece on the title chase and this one on the top four and relegation battles. Today I'm looking at the individual games of the weekend.

This is the big one. Sunday's early match features the Premier League's two best sides, by my rankings. Both clubs are in position to win the league if the win all their remaining matches. Obviously only one team can win this one, so it's big. If there's a winner, that side goes well into the lead in the title race. I project Liverpool with a greater chance of victory, pretty much entirely due to home field advantage.

Those 50 to 60 percentage point swings show what a big game this is. I just keep saying that. Maybe instead I'll use a picture. This also considers Chelsea's title hopes alongside Liverpool's and Manchester City's. 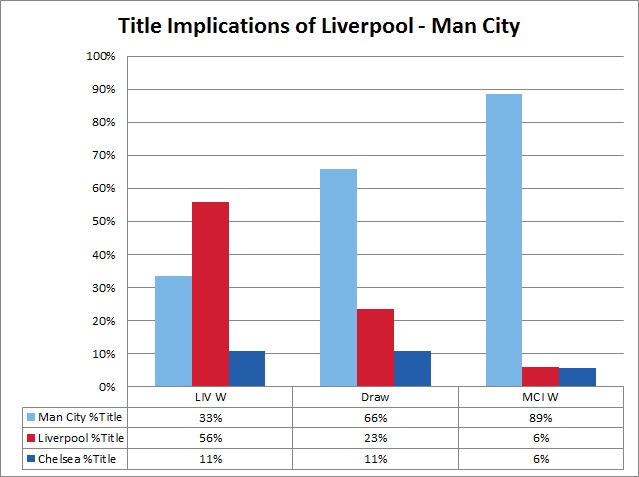 Anything other than a Liverpool win leaves Manchester City as big favorites. This has significant tactical implications. For City, a draw means they actually slightly extend their lead on Liverpool in the title race, by more than Chelsea gain from the chance to pick up points on the leaders. I suggest that Manuel Pellegrini might be well-served by a more defensive game plan than usual. If his side can come away with just a point, they're still 2-in-3 favorites for the title.

For Chelsea, a draw or a Liverpool win are just about equally good. Since Chelsea have an opportunity to take points off Liverpool later, and their title hopes ride on winning that match no matter who they have to track down for the title, it does not matter much if Liverpool have more points going into that game.

It's the battle for survival. Loser leaves the league. Gun thugs take out the midfield of the defeated side. Maybe i'm overselling a match that is likely to see Norwich City park the bus and Fulham do their usual mad dash at the goal without a plan. But it really is rather a big deal. Norwich City have four exceptionally tough matches after this and could easily be relegated despite currently holding a five-point lead on 18th place. If they drop points, it won't necessarily mean that Fulham will avoid relegation, but it suddenly means that one of Fulham, Cardiff City or Sunderland has a good shot at overtaking the Canaries for 17th. A Norwich City victory probably locks those three sides into playing in the Championship next year.

The Toffees played themselves into the top four race last weekend. They can easily play themselves out of it this week. They play at the Stadium of Light and then host Crystal Palace mid-week. With an absolutely brutal schedule to follow, Everton need both wins. And neither is simple.

The upside to Everton being nearly 1-in-2 to drop points this weekend is that, if they can get the win, they're going to be nearly up to even with Arsenal for top four. For fans of Tottenham Hotspur and Manchester United, there is a slight advantage in Everton dropping points. If they stumble, there is the sliver of a chance another side could step into their shoes as Arsenal's top competitor. 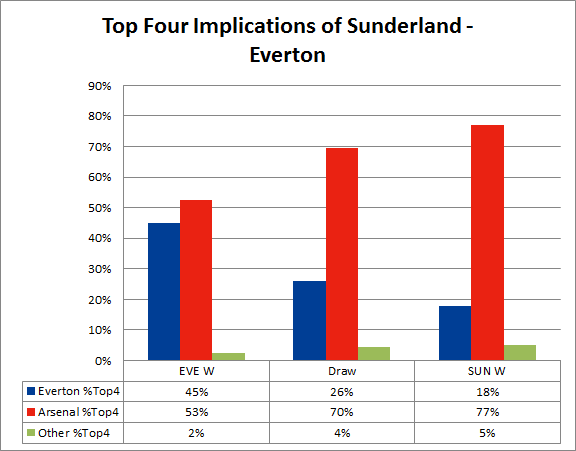 And finally, the weekend's most important match. Spurs are currently about 1-in-40 to finish top four. A win could double their chances up to 1-in-20. I don't mean to be giving false hope. To get a sense of what 1-in-40 odds mean, you can flip a coin six times. If it comes up heads all five times, that's a win. That may even happen when you try it, but it sure isn't going to happen very often. It's likely that the chance of a miracle run will get snuffed out entirely, and it may well happen at the Hawthorns this weekend.

Those whose hopes run to the contrarian may note that a loss on Saturday gives Tottenham a nearly even-money shot at missing out on Europa League action next year. So if that's your thing, there it is.

Oh and I have the projected table too.

Because of rounding, not all the numbers necessarily add up quite right.