Arsenal's late-season swoon: It's not about the fixtures

I'm writing up a piece on Arsenal's late season swoon, and I've come across a seemingly plausible but ultimately unconvincing explanation in several places around the internet. I'd like to address it here.

Share All sharing options for: Arsenal's late-season swoon: It's not about the fixtures

What happened to Arsenal? Flying high in first place at New Years', barely hanging on to fourth place in the middle of April. It's one of the great mysteries of the Premier League season. I'm in the process of writing up my preferred explanations of their swoon, but I'd like to take a minute here to address one explanation that I do not find convincing.

It's Not About the Fixtures

Chris Collinson wrote on twitter, "Arsenal's title challenge was an illusion created by the order of their fixture list." He backed up this claim with a graph showing Arsenal's results in 2013-2014 compared to their results in the same games last season. I have reproduced the key section of Collinson's graph (which also featured in a Mike Goodman article on Grantland I quite liked), and I'd like to explain why it does not show what he says it shows. I'm cutting the fixtures off at midseason because this is the section of the graph which purports to show that Arsenal were underachieving in the first half of the season, even while they were contending for the title. 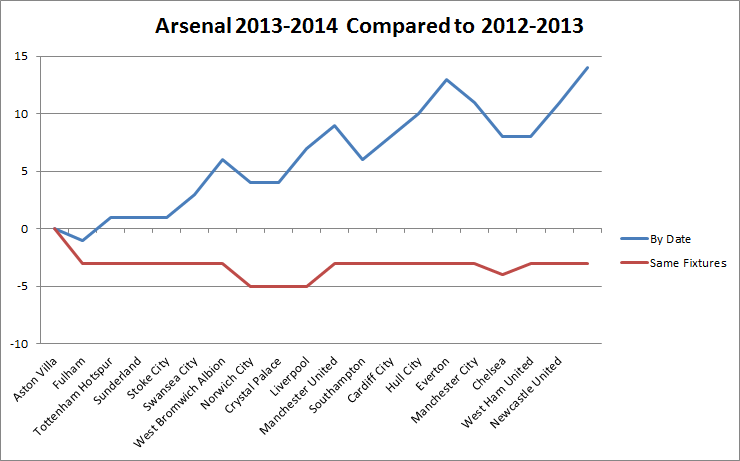 So this shows that, for instance, after the first nine fixtures of the Premier League season (through the match with Crystal Palace), Arsenal were seven points ahead of their pace through nine fixtures last season. But in those same fixtures, against the same opponents on the same grounds (subbing in relegated and promoted sides mutatis mutandis), Arsenal were actually five points behind their pace from last season. So Collinson concludes, it was the fixtures. They just had easy fixtures to start the season.

I did not find this argument compelling when I read it, since Arsenal were in first place at the New Year. Having played all nineteen other EPL sides exactly once. There's no way to for nineteen matches against the same opponents to be a suffiiciently different schedule to explain a 12 point gap. It must be something else.

So if it's something else, why does the graph seem to work? The key is the use of points difference rather than total points. Here's a graph showing instead the total points for Arsenal in their first nineteen fixtures this season, and their total points from the same fixtures last season: 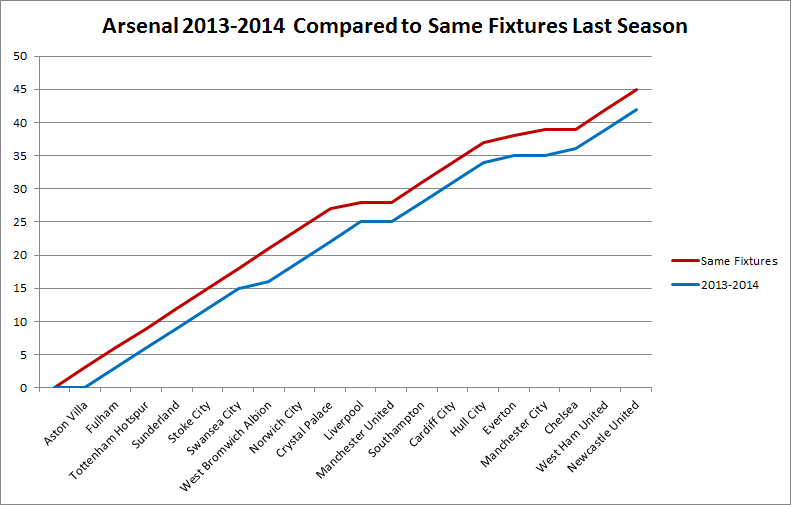 The first thing you might notice is how straight that red line is. Those first nine fixtures, remember, through Crystal Palace? Where Arsenal were five points behind their pace from the same fixtures last year? Well, Arsenal started 2013-2014 with 22 points from nine matches. That's an excellent, even perhaps title-winning pace of 2.4 points per game. In those same matches last year, Arsenal took 27 points. They won all of them.

That means the first graph is giving Arsenal a "-5" rating through nine matches because they dropped five points in nine matches. A perfect record is not a useful baseline for this kind of comparison because it's not a mark of any hidden weakness in a club to drop five points from nine matches. Arsenal were behind a perfect pace, but no one should be expected to be perfect. Even title-winning sides drop points.

Similarly, check out where the red line ends up. 45 points. That's a 90 point pace, having played every EPL side once. Arsenal are behind their pace in the same matches because in the same matches last season, Arsenal played at a guaranteed title-winning pace. The negatives in that first graph obscure precisely what has been subtracted from what to create that negative difference. Arsenal took points at a title-winning rate in the first half of this season, and if they had continued on that pace they would be in first place today. It just happens that, for whatever reason, in the 19 identical fixtures last season, Arsenal took points at an even better, absolutely nailed-on title-winning rate.

They aren't "easy" fixtures. They're a perfectly normal set of matches, one against each possible opponent. The fact that this happens to be a slice of Arsenal's fixture list from last season where they played at a 90-point pace does not mean that Arsenal underachieved by playing at an 85 point pace. If we want to explain how Arsenal fell out of title contention, it's going to take more than the equivalent fixture list to get there.