I did this two weeks ago. Now I've got the numbers again. What are the benchmarks for the clubs in the title, relegation and top four races?

Most of the longshots have sorted themselves out of the English Premier League chases. Arsenal dropped out of the title race a while ago, and now Chelsea are on the verge. Both Chelsea and Manchester City, really, can't afford to drop points before the end of the season. Any slip-ups, even in tough matches at Anfield or Goodison Park, will probably throw the Premier League title to Liverpool.

In the top four race, it's down to just Everton and Arsenal, and the Toffees need to hope that Arsenal screw up in one of their three, quite easy matches remaining. Tottenham Hotspur and Manchester United are effectively eliminated. Down at the bottom, Swansea City's late winner at Newcastle earned their safety, while Aston Villa and West Brom just need three points from somewhere in the next few matches. It leaves a four-team race for one spot that only got tighter with Sunderland's shock win at Chelsea.

This one is Liverpool's to lose. Of course, they could easily lose it. The Reds face a difficult match home to Chelsea at the weekend, and neither of their remaining matches after that is an obvious gimme. Home to Newcastle sounds good given the Magpies' horrible slump, but there's more than enough talent in that Newcastle side to win a home match. Here's the schedule comparison:

Manchester City's extra match gives them an opportunity, should Liverpool drop points. Chelsea's schedule is easy other than the Liverpool match, but they could be drawing dead regardless. Six points for Liverpool would still put them ahead of Chelsea, while City can afford a draw and still be ahead of the Blues on goal difference. A lot of things have to go right to put Chelsea in title contention, but it's not impossible.

Here are the graphs for the clubs in the title race. 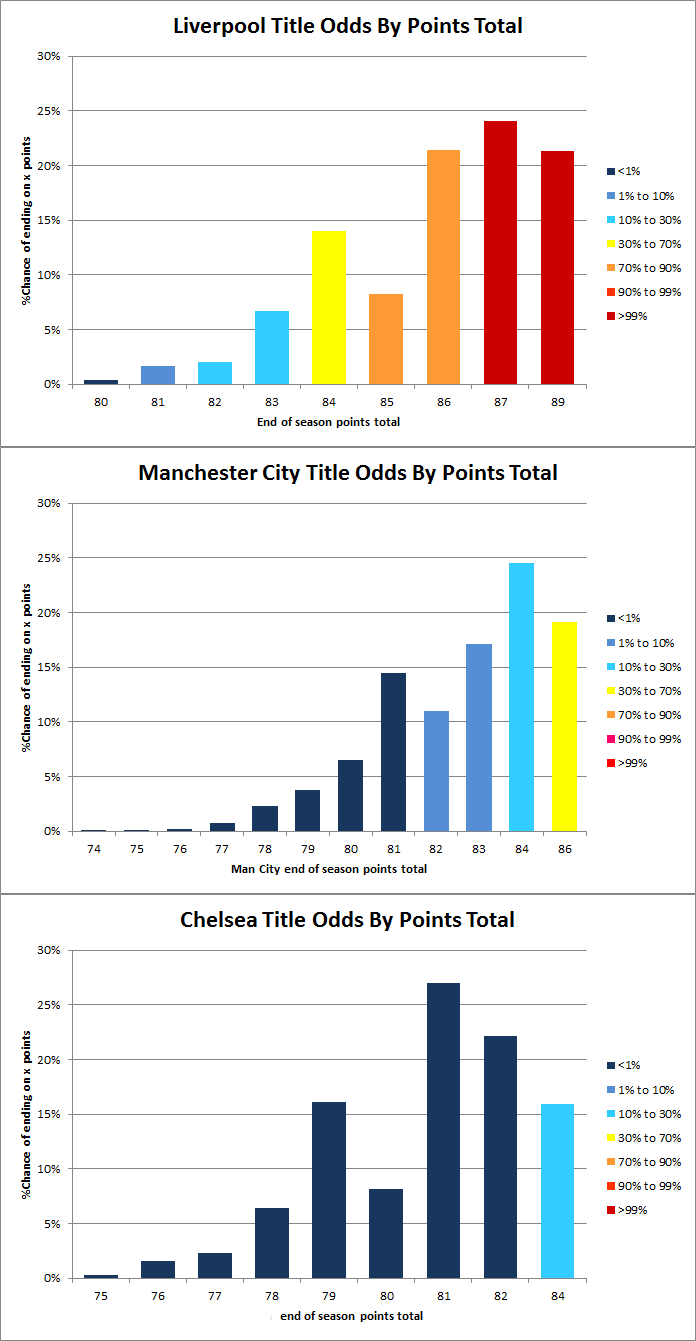 Two wins and a draw get Liverpool more points than their opponents can possibly take. If they lose a match, they're still favored, but it opens the door for Manchester City. The only real chances that City or Chelsea have of taking the title are if they win out, and neither is terribly likely to do so. I have the odds of winning out for City at about one in five, and about one in six for Chelsea.

Obviously the determining factor here may be Liverpool vs. Chelsea. It's a weird fixture, in that Chelsea are fighting for their title shot to stay alive, but the effects will be much more notable for Liverpool and Man City. A Chelsea win keeps their in the race, but it brings Manchester City back into serious contention. A Liverpool win does not end it, as they could still blow the title, but it would mean Liverpool would have to seriously choke to drop their lead. 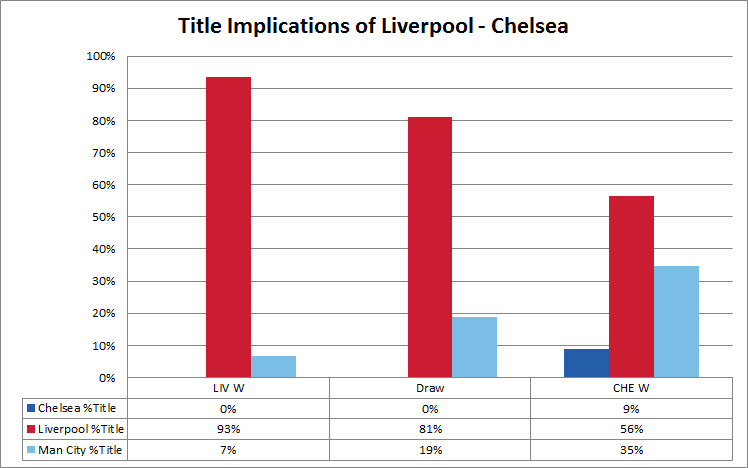 Everton's home loss to Crystal Palace dealt their chances at Champions League qualification a crushing blow. Arsenal, with both Aaron Ramsey and Mesut Özil fit, have been a clearly superior side to Everton. (See my article from last week for more on Arsenal's slump and possible recovery.) But Arsenal have proven themselves capable of slipping up in the past, and they could do it again. The twin victories for the Gunners and Toffees this weekend finished any real chance of a Spurs comeback. Tottenham's top four odds stand now at 0.1 percent.

West Bromwich Albion are a better side than their record indicates, and Newcastle United have enough talent to give Arsenal a match. But really, every single match remaining on Everton's schedule is more difficult than Arsenal's toughest fixture. Even with just a one-point lead in the table, Arsenal's top four hopes are riding high. My projections still give Everton a one-in-five chance at fourth place, but even if they win out, they could easily get shut out. 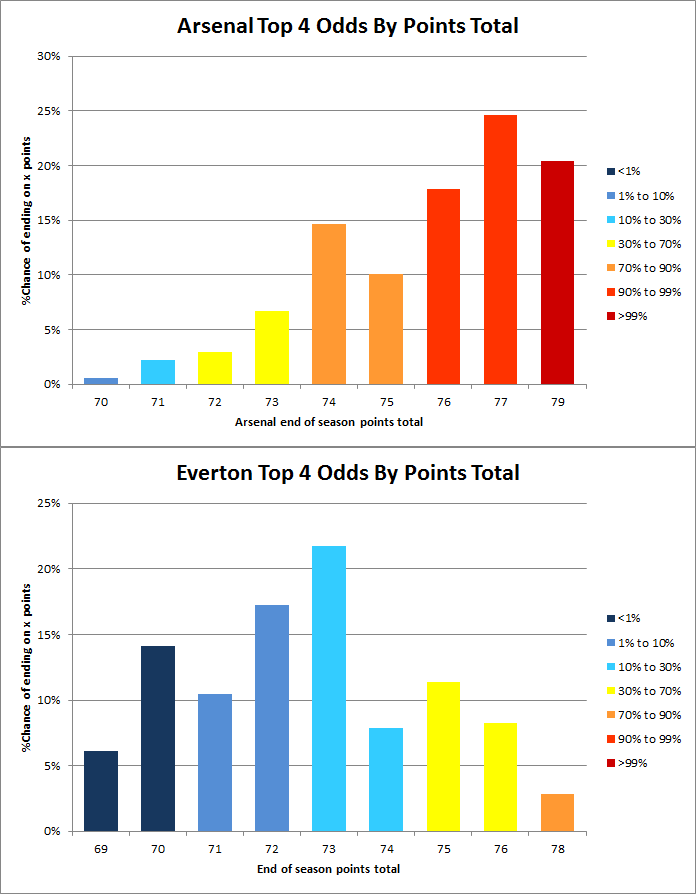 The difficulty of Everton's schedule means that they have no better than maybe a three percent chance to win out. If they do, they go to maybe 80% to finish in fourth place. Without those three very difficult wins, Arsenal probably take it down.

I had been projecting safety for Swansea City all year long, and they finally got there with that victory over Newcastle. I'm still waiting on West Brom, although it would take quite a choke for them to fall into the relegation zone at this point. Norwich City's insanely tough final schedule is looking like more and more of a killer. One of Sunderland or Cardiff City is likely to take three points this weekend, which would put either side ahead of the Canaries. Norwich are still probably fine if they can just win one match, but that is going to be decidedly difficult.

It is possible that either Chelsea or Arsenal might have reached "nothing to play for" status by the time they face Norwich. That's probably Norwich's best hope right now. Most clubs with "nothing to play for" actually play just fine, as the players are still out looking for their best interests, looking to win a new contract or playing time, and just generally being the crazy competitive freaks you have to be if you want to be professional athlete.

The other hope for Norwich is that so many of their competitors are terrible. While Cardiff, Sunderland and Fulham all have many winnable matches remaining, they would not be here if they were capable of defeating mediocre opposition when needed. Just one win bring Norwich to 35 points and something like a 50/50 shot at remaining in the Premier League. None of their opponents are likely to add more than five or six points before the end of the season. 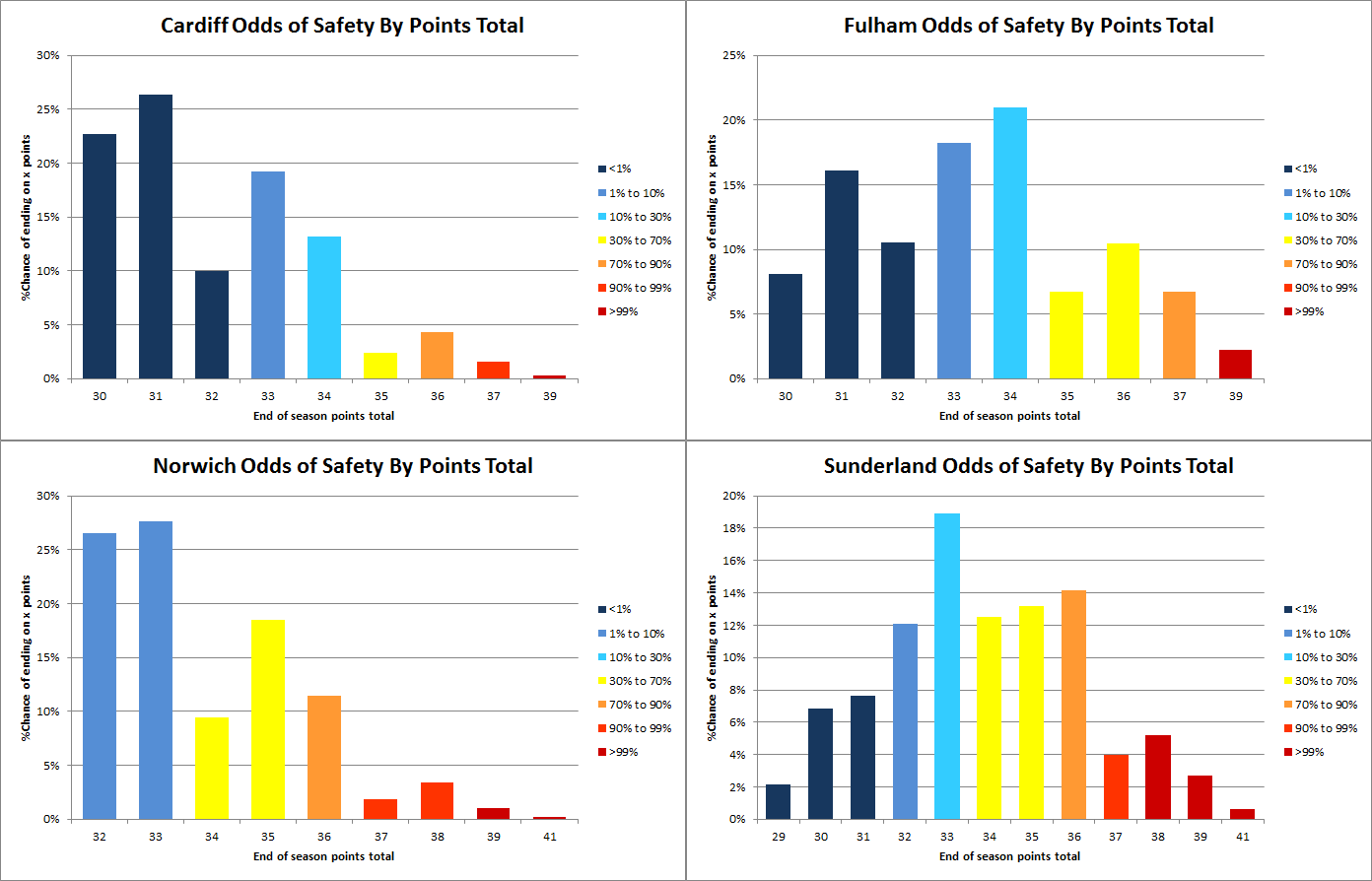 As you can see, Norwich need just the one victory, while all of Sunderland, Fulham and Cardiff need two. That makes this a roughly even race to the finish. It should be fun.

Because of rounding, not all the numbers necessarily add up quite right.