It just takes really, really large samples to identify it.

Share All sharing options for: On shooting statistics: Finishing skill is real

Statistical analysis of football has produced a shocking claim: Player finishing skill is an illusion. When you adjust for the average quality of the chances a player takes, it's very hard to find players who, year to year, score more goals than expected. Take Emmanuel Adebayor for example. With Spurs last season, Adebayor took 42 non-penalty shots. He scored five of them, compared to about six or seven expected goals based on chance quality. This year Ade has taken 41 non-penalty shots and scored 10, compared to about five expected goals. How well a player will finish his chances is extremely hard to predict year-to-year.

On the other side, take Christian Benteke. Everybody's favorite transfer target last season scored 16 non-penalty goals on 101 shots. However, his expected goals was only a little under 10. This season his finishing has returned to normal. He's scored eight non-penalty goals compared to about seven expected goals. So he's still been a good finisher, but not at the crazy rates of 2012-2013.

If you go through the numbers, it's not easy to find individual players who consistently score way more or way fewer goals than expected based on the chances they take.

But finishing is an entirely real skill

It is? But you just said it doesn't show up in players' numbers year to year. In fact, both of these things are true. The issue is sampling.

In the aggregate, forwards and other high-volume shooters finish their chances more efficiently than other players.

40 shots sounds like a lot, but as we saw in the Adebayor example, the same player can get highly variable results over two samples that size. When you look at players year-to-year, you're working with samples that just aren't large enough to capture the player's skill. I think it's not so surprising. Think about everything that has to go right for a goal to be scored. Scoring requires striking a moving ball with your foot while identifying the location of the keeper and avoiding the defense. Any little thing off by a millimeter and you could end up shooting wide. And sometimes you get it entirely wrong but the ball deflects off a defender and loops into the goal. Over time all that should even out, but it turns out that "over time" is usually over multiple seasons of football.

I found that in nearly every case, groups of players who play more advanced positions and attempt more shots also score more goals compared to expectations.

I went through the English Premier League data from the 2009-2010 season to the 2012-2013 season. I broke the players into subgroups based on their primary positions played and their volume of shots taken per 90 minutes. Forwards and high-volume shooters outperform expected goals, while defenders and low-volume shooters underperform. Midfielders and medium-volume shooters fall in the middle. 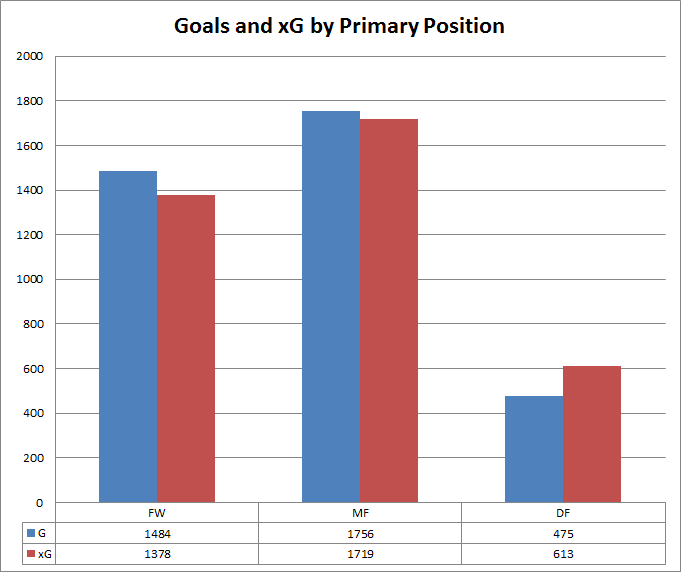 So forwards scored about 100 more goals than expected, while defenders scored about 140 fewer. Midfielders came out about even. The players in more advanced positions finish better, in samples of over 10,000 shots. (It's about 12,500 shots by forwards, 24,000 by midfielders and 6,500 by defenders.) Managers, unsurprisingly, know to put their better finishers in advanced positions, and from these positions the players score more goals.

We see a similar effect when the players are broken down by shot volume. Once again, players who shoot more often also score at higher rates. 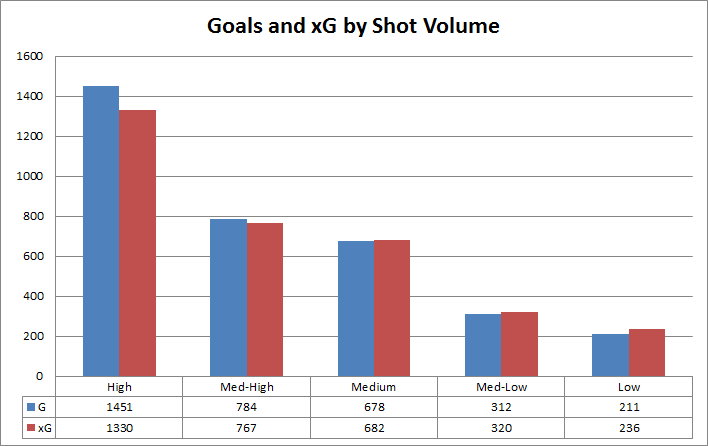 Here's another graph showing the effect, but by percentages. This is the percent of goals above or below expectation that players from these groups scored. 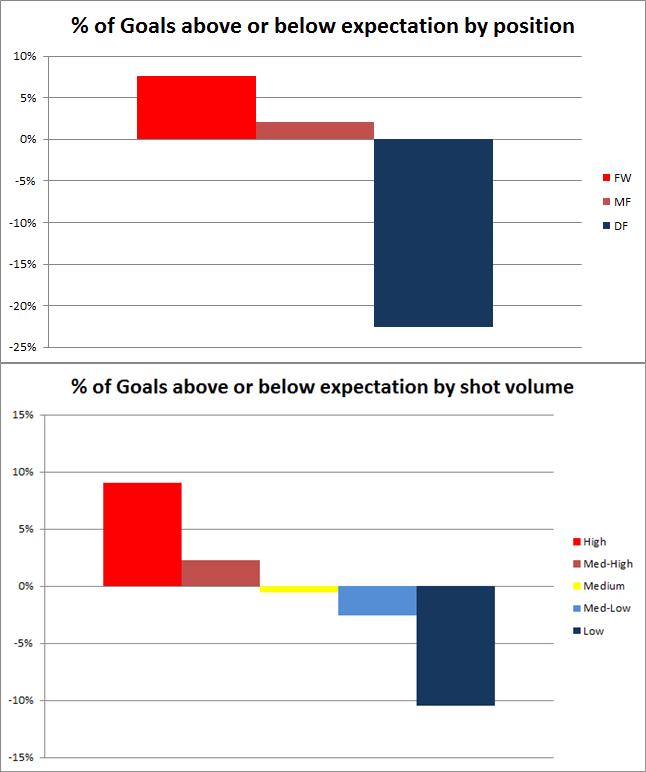 I think this shows clear differences among Premier League football players in terms of finishing skill. But these buckets are pretty large. Can we distinguish between forwards? Between different types of midfielders?

Again, the answer is yes. Forwards who get more shots also finish these shots at better rates. The same is true for defenders as well as for most midfielders. 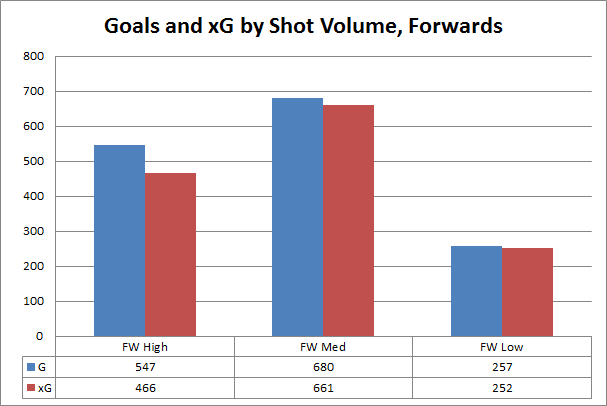 While all forwards out-perform expectations, medium and low-volume shooters only barely beat the average. Almost all of the overperformance of expected goals among forwards comes from the performance of a relatively small number of high-volume shooters. These forwards, who average about 4.5 shots per 90 minutes, score about 15 percent more goals than expected. Their lower-volume compatriots, who average 2.8 and 1,9 shots per 90 respectively, score no more than about two percent more than expected.

When you aggregate data and collect groups of similar players, there emerges a clear tendency of higher-volume shooters and more advanced players to finish their chances more efficiently. I think this is a selection effect. Football managers recognize which of their players have the best striking skills and arrange tactics to get those players the most chances.

With midfielders, I wanted to be a bit more precise. A defensive midfielder plays a very different role from a No. 10 or a winger. So I broke the data, as best as I could, into three groups. I took first central midfielders, players whom Opta categorizes as either central or central defensive mids. I took wide midfielders, classified as wide or wide attacking players. And I separated finally the small group of No. 10s, classified as "attacking midfielder, central." Within this group you find players like Michu and Wayne Rooney, and I felt it made sense to split them out from the rest.

I found that while splitting up central midfielders and No. 10s by shot volume created the expected effects, we see something notably different with wide midfielders. High-volume shooting wingers are actually the worst finishers among the population of wide attacking players. But lower-volume wingers stand out as quite good finishers. I honestly don't know quite what to do with this result. 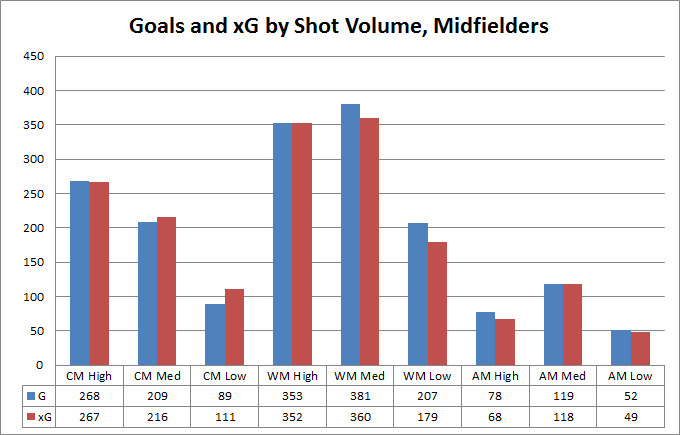 As you can see, central and central attacking midfielders who shoot the most, also finish the best.

But what is going on with those wingers? I don't have any easy explanations. It's possible there are just a lot of Andros Townsends out there, guys who just want to cut in and shoot but are not good enough at it. It's possible that the low-volume wingers are only choosing to shoot in situations that are particularly high-expectation, and my xG numbers are missing something. I honestly don't know.

My preferred hypothesis right now is that we're seeing a selection effect in process. Wingers who are good at finishing get moved to central or forward positions, as most famously in the cases of Gareth Bale and Robin van Persie. Attackers who aren't as good at finishing often get shunted out wide rather than being placed in high-value central positions. So perhaps we're seeing the managers often don't quite have a handle on which wide players should have which jobs. But that's no more than an attempt at a just-so story. What do you think?

Finally, here's my data in tabular form (and sortable).