I use my projections to break down the EPL Title Race. How many points will it take for Chelsea, Manchester City or Liverpool to win the title this year?

Share All sharing options for: Breaking Down the English Premier League Title Race

We have an honest-to-goodness title race in the English Premier League right now. Liverpool lead the way currently on 74 points, just two ahead of Chelsea. But Liverpool will face Chelsea at Anfield in two weeks time, so the Blues can jump into the lead with a big away win. These are not your current title race leaders, however. That place goes to Manchester City, who despite being four points off the lead, have an advantage with two very winnable games in hand home to Sunderland and later Aston Villa. My most recent projections give Manchester City a 60 percent chance of winning the title, with Liverpool trailing at 30 percent and Chelsea in the rear at 10 percent. No other club has any kind of title shot, but three in the race in April is more open than this has been for a long time.

At this time of the year, fans often like to list out the remaining matches and consider possible scenarios. I've used my projection engine to do this one better. What are the odds of each possible final point total for each of the title contenders? Further, what chance of winning the title does the club have at each total? So say that City win five of their next matches, draw one and lose one. Is that good or bad? How likely are they to win the title? I've got the numbers for that.

72 points, two behind leaders Liverpool, two ahead of Manchester City. Five matches remaining, maximum total points 87. None of the title contenders have particularly notably tougher schedules than the others. As I'll note, Liverpool have the toughest run-in by a reasonable margin, but it's all pretty close.

Chelsea have only one match against a truly competitive opponent. Sunderland and Norwich City are likely to be in the midst of a relegation battle when they face Chelsea, and Swansea City, while most likely safe, have not guaranteed themselves a place in the Premier League next season. It's pretty likely that by the 11th of May, Cardiff City will already be eliminated and will be playing for nothing but pride and their next contracts.

This means that Chelsea's hopes of winning the title do not just ride on success at Anfield. They basically have to run the table to get to the title. Dropped points against relegation stragglers are quick ticket down the table in a competitive race, as Chelsea discovered when they went from favorites to also-rans in the course of one afternoon at Selhurst Park just two weeks ago.

The following chart gives you the numbers. I have the odds of Chelsea finishing on each possible point total, and I've color-coded the bars based on their chance of winning the title. 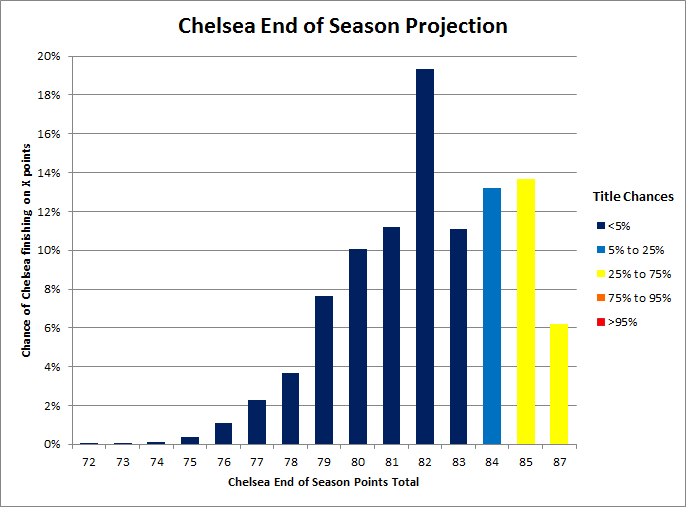 Anything under 84 points means Chelsea need to hope and pray for screw-ups from Liverpool and Manchester City. They can possibly win the title if they drop points once before the end of the season, but twice is pretty much a death sentence.

The big difference between 84 and 85 points is a function of the schedule. 84 points means Chelsea win four and lose one, while 85 means they win four and draw one. It's quite likely, in the former scenario, that the loss would have been to Liverpool at Anfield, taking the Reds five points clear and probably ending Chelsea's title hopes. A draw would not bring the Blues into the lead, but it would keep them in contention.

Even a perfect run would leave Chelsea short of supreme confidence. They could win at Anfield and run the table, and Manchester City could still easily surpass them. Chelsea do get up to a 65% chance of winning the title with a perfect run, and that is the only scenario in which they are title favorites.

People have talked about Liverpool's "favorable schedule" over the end of the season. I argued a month ago that the schedule was not actually so favorable, and we can see that again in these projections. Here's a simple way of thinking about it. This weekend, while Liverpool are facing Manchester City and could easily lose or drop points, Chelsea will have a relatively easy match against lower-mid-table Swansea. Then two weeks from there, while Liverpool face Chelsea, Manchester City will be over at Selhurst Park taking on a Crystal Palace side just about guaranteed safety. Which matches would you rather be playing?

It's true that Liverpool can guarantee themselves the title if they win all five matches, but it's also not terribly likely that they will. And if they drop points, it's most likely going to be in those matches which formed the backbone of the "favorable schedule" argument.

Looking at Liverpool's projected points graph, their two-point leads gives them a lot more red and orange than Chelsea's. But the odds of ending on fifteen points stand a touch lower even though my projections rate Liverpool as the better side by a good margin. 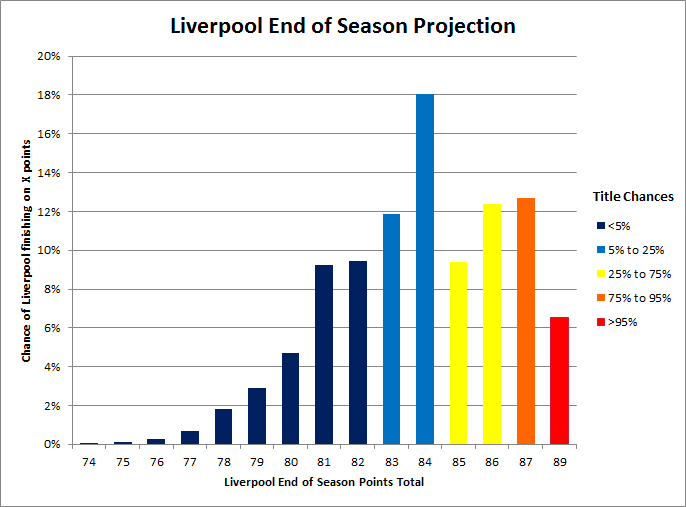 By far the most likely outcome of Liverpool's final run is three wins, a draw and a loss. They have two tough matches on the docket, plus the always-read chance of choking away a winnable match against lower-table opposition.

One fun thing here is that Liverpool have slightly better title chances finishing on 86 points than on 85. This is because on 86 points, they have most likely dropped three points to either City or Chelsea. But the only way to get to 85 points is with three wins and two draws, so it means they have avoided losing to either of their top competitors. Liverpool are nearly 50% to win the title at either 85 or 86 points, and then up to about 80% at 87. These are the realistic magic numbers for Liverpool. Obviously a perfect run means a guaranteed title, but if they can avoid dropping more than four points, a title is very possible.

70 points, four points behind Liverpool and two behind Chelsea. Seven matches remaining, maximum total points 91. Manchester City are the only one of the title contenders with a tough match against a non-title contending side remaining, as they will take on Everton at Goodison Park in the ante-penultimate match of the season.

But it's those two games in hand, first home to Sunderland and then home to Aston Villa, that make all the difference in the projections. If it hadn't been for the cups and that day the Stadium of Light played the part of the cow from Twister, we might see Manchester City as huge title favorites. In this reality, however, they still have to win those matches. For a side that has dropped points to Cardiff and Norwich this season, that's no guarantee. And so while City are favorites, there's a solidly two-in-five chance that someone knocks the Citizens off their perch. 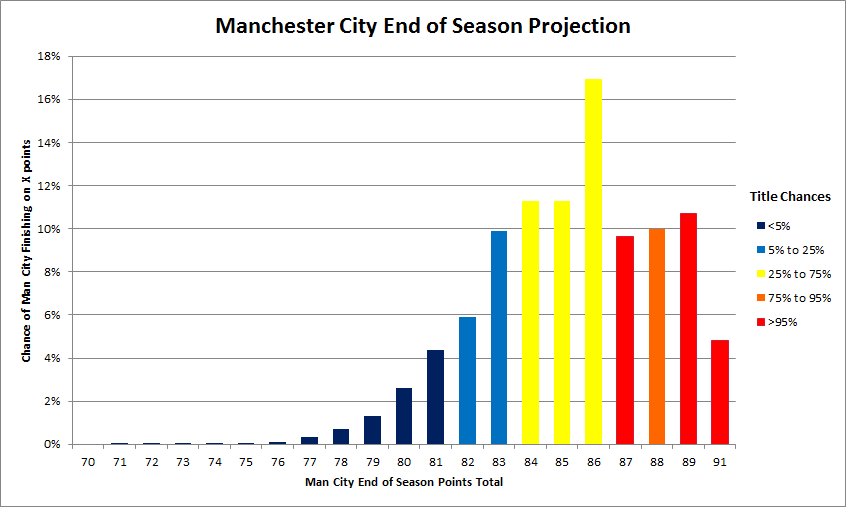 That's a whole hell of a lot of yellow and red. Man City can drop seven points and still have a reasonable chance of hanging on to the EPL title.

To get to 87 points, Manchester City have to win five and draw two. So Liverpool at best have managed a draw at Anfield. That means Liverpool's maximum possible points is just 87.And Liverpool are highly unlikely to pass Manchester City in goal difference if City get five more wins. But at 88 points, it means Man City have lost a match. If that match is lost to Liverpool, then the Reds could make it to 89 points. So then there would be roughly 1-in-10 chance that Liverpool could steal the title at 89 points from City at 88. That would be something to see.

Who cares about color coding and visualization, right? Can we just have some html data tables up in here?

Coming next, the top four and relegation races. Plus look for a piece on Arsenal's ongoing collapse, forum to be determined.