We are down to the wire now. With Liverpool losing to Chelsea, the Citizens have a very slim advantage in the title race. The relegation picture is beginning to clear up, but it's not all joy yet for Sunderland.

As I did last week, I have run a series of projections for the remainder of the EPL season. Last week, I noted that the Liverpool-Chelsea match was basically a title decider. If Liverpool won, they were going to be exceedingly tough to catch. But if Chelsea won, it would make the race roughly a dead heat between Liverpool and Manchester City. Chelsea are not eliminated but will still need some good luck.

We are very likely headed for a goal difference title. In 1000000 simulations of the remaining Premier League season, one team ended with more points than the rest on 650000 times. So there is a chance slightly over 1-in-3 that two (or three) teams will end the season tied at the top of the table. Manchester City have a big advantage in goal difference over Liverpool, but it's not quite enough to determine the outcome. City and Liverpool ended the season tied for first about 250000 times. City won the title in almost every one of those seasons, but 663 times it went to Liverpool. And even more fun, in 414 of those 663 simulated seasons, Liverpool won the title not on goal difference, but on goals scored, the next tie-breaker. So it could happen. I think, regardless of your rooting interest, that would be cool.

So that's a full 25 percent of simulations that ended in a tie between Manchester City and Liverpool. In most of those runs, both clubs finished on 86 points. We have finally reached the point in the season where winning out is a reasonable hope. Fans seem to start talking about "controlling our own destiny" in February, even though every season the actual results show this is completely meaningless. Pretty much no one ever wins eight or ten in a row. Two or three, though, that can actually happen. Here are the odds of each of City, Chelsea and Liverpool winning out, and their odds of winning the title if they do.

Manchester City have the toughest schedule by a large margin.Their match at Goodison this Saturday is the most difficult remaining for any of the title contenders, but most importantly, they have three matches. A club that has already tripped up against Sunderland has three opportunities to do that again.

Here's some visualizations of the top three clubs' title chances based on their results through to the end of the season. 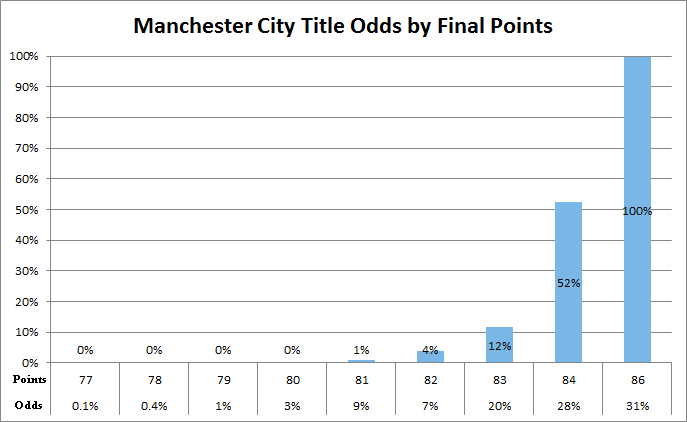 For City, two wins and a draw is enough to give them a fair shot at winning the title. Any loss probably ends their chances. I think Chelsea are the reason that 84 points is so much better than 83 points. Chelsea are very likely to win out and finish on 84 points, but City would certainly beat them on goal difference if the two sides ended up tied. On 83 points, it's very likely that either Chelsea or Liverpool have passed them by. 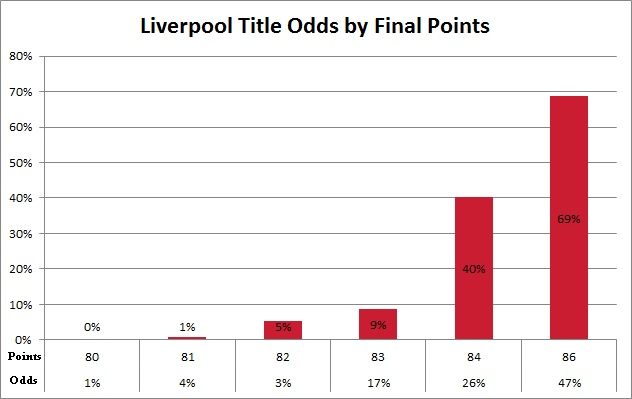 We see a similarly massive drop-off for the Reds between 83 and 84 points. So, that's definitely about Chelsea. At 84 or 86 points, this is a two-team title race. But once you take a loss, Chelsea re-enter the picture and make winning the title nigh on impossible. 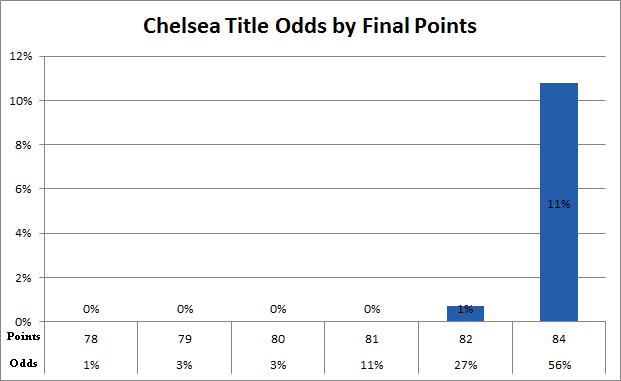 For Chelsea, meanwhile, winning out does not mean much. They are only 1-in-10 to finish in first place even if they win out. But anything other than winning out is pretty much a death sentence for their title hopes.

We can also take a look at just Saturday's match. Since this is the match where City are most likely to drop points, their winning here would put them in excellent position to win the title. But any dropped points would shift Liverpool back out front, and a loss means that Chelsea have real hope. 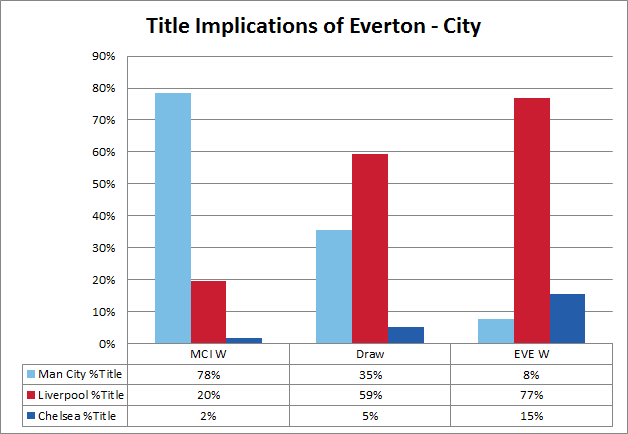 In my most recent projections, Cardiff City are basically done. I have them at a 98 percent chance of relegation, while Norwich City and Fulham are still alive at 85 and 84 percent respectively. Basically, if Sunderland win one of their next three matches, this thing is pretty much over. But Sunderland, despite a couple good recent results, remain an extremely flawed side perfectly capable of blowing all three opportunities. I have the odds of Sunderland taking no more points at about 1-in-10, and their odds of not winning any matches at about 3-in-10. So that's where fans of the Cottagers and Canaries can place a little bit of hope.

Here's similar charts for the relegation race, showing the odds of finishing on certain points totals and relegation odds at each point. Click on the table for the full size version. 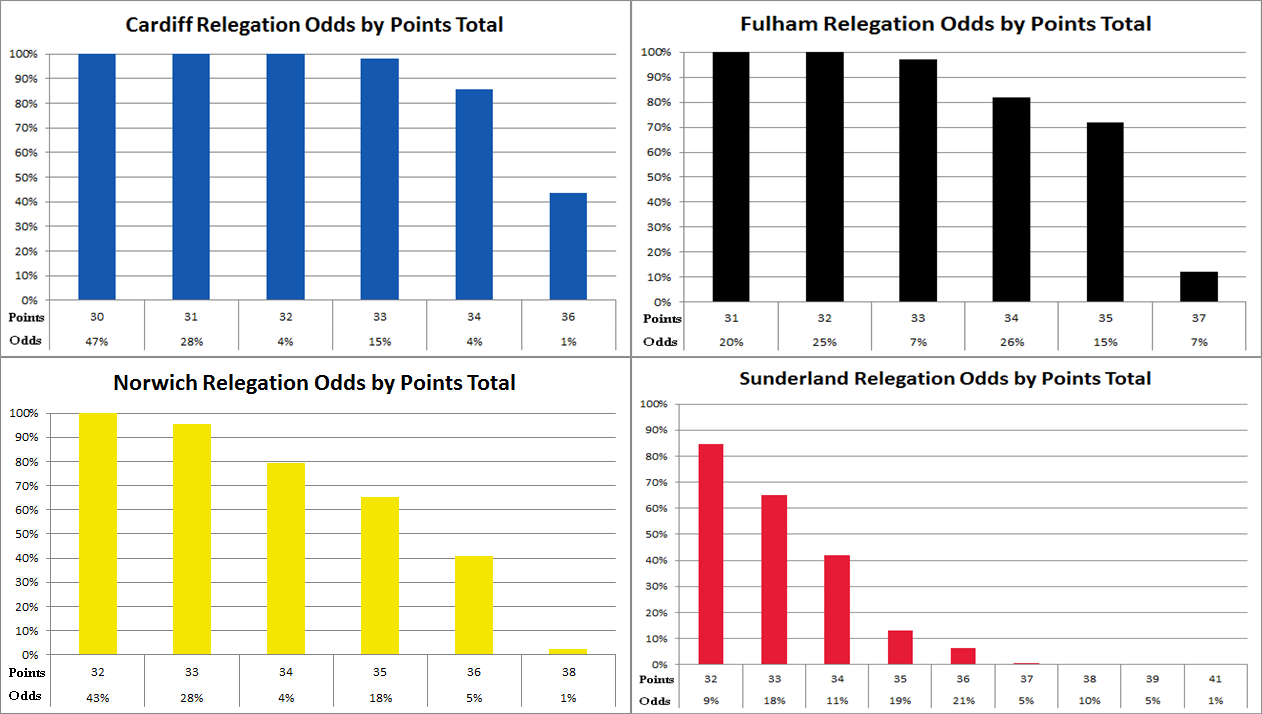 It's not like it takes that much to escape relegation. If Norwich City can just manage a win and a draw, they'll be favorites to stay up. Win both and safety is about guaranteed. Fulham really need to win both of their remaining matches, but likewise two wins would bring the Cottagers to roughly 9-in-10 odds to stay up. The problem for all these teams in the relegation picture is that they're pretty terrible, and they're unlikely to win much of anything. In that case, Sunderland have the upper hand.

The only other club in the Premier League at any notable risk of relegation is Aston Villa. I have them around two percent in my latest projections, and if they take no more points this season, they'll be around seven percent to be relegated. The lucky thing for Villa, again, is how unlikely it is that more than one of the relegation fighting sides will win more than one match before the season ends. They could be in trouble, but they almost certainly won't.

So You're Telling Me There's a Chance

(Revised: No, I'm not. Sometimes a guy who likes numbers needs to work on his addition. As well as subtraction, addition's tricky pal.)