This article reports recently being rocked like a HarryKane.

Share All sharing options for: The 16 best young striker seasons in the EPL since 2009-2010

20-year-old Tottenham Hotspur striker Harry Kane has been performing at an elite level for the last several matches. In a year when joy and optimism have been hard to come by at White Hart Lane, Kane has been providing the ground for both in just a few matches. He's scored three goals in slightly over 400 minutes. He's attempted 25 shots and put ten on target. The majority of his shots have come from the danger zone, so this is far from an Andros Townsend situation where the judgment of the shooter can be called into question. Kane's just been plain excellent.

I went back into my database to find similar seasons. I found mostly either top prospects and current stars. With, to be fair, a couple of flame-outs mixed in. There is a sure thing with youth prospects. But Harry Kane's comps are about as good a lot as you could expect.

First, there just aren't that many young strikers who get playing time in the Premier League. Since 2009-2010, I found just 52 players who started at least one league match at center forward and played at least 100 league minutes on the season. Among these, here are the top seasons by expected goals scored per 90 minutes. 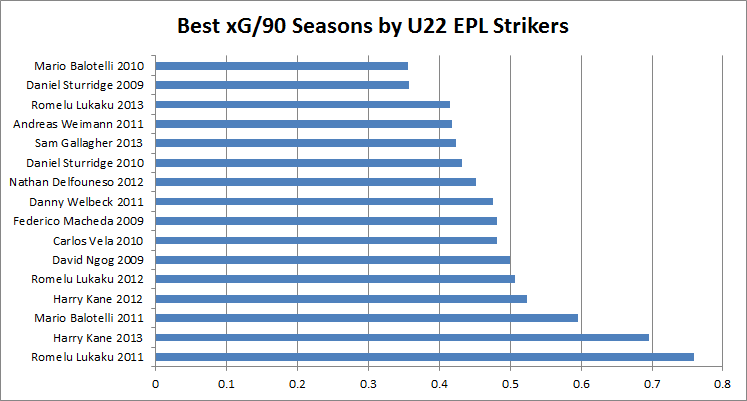 Kane's 2013-2014 is the second best I have on a per-minute basis, and check it out, he appears again fourth on the list. I think it might be fun to just go through these seasons and look at what other top young strikers have or have not eventually achieved.

This one is a tiny sample, just 158 minutes. Lukaku got one start against Blackburn Rovers and a couple of substitue appearances. Though he did not score a goal, he attempted nine shots, four from the danger zone. This added up to an xG/90 of 0.76, best in my database.

Balotelli has the best season over 1000 minutes for xG/90. He started 14 matches for Manchester City and was subbed on nine times, for a total of 1321 minutes played. Excluding penalties, the Italian striker took 79 shots in 2011-2012, 32 from the danger zone, and scored 10 goals compared to about 8.7 expected. This gave him an xG/90 of 0.60. After being benched for the sort of behavior that makes Balotelli Balotelli, he returned at the end of the season to help carry City to their first league title in many years. Not long thereafter, Balotelli did too many Balotelli things and got himself sold to AC Milan. No one doubts his skill, and the numbers match the evaluation, as long as he can remain on good terms and in good standing with him coaches and teammates.

Cool, huh? Harry Kane only got one start last year at Norwich, along with a couple of substitute appearances, but he showed the same skill at finding himself in good positions to shoot. Of Kane's four shots, three were from the danger zone, for an expected goals total of 0.8, giving him an xG/90 of 0.52.

Lukaku comes in behind Kane on a rate basis, but this is probably the best young striker season I have in my EPL database. Sent out on loan to West Bromwich Albion, the Belgian striker could not have reasonably played better football. He scored 15 league goals in a season before he'd even turned 20. An average shooter would be expected to score about 11.3 goals in those opportunites, so Lukaku's 12-13 season rates at 0.51 xG/90.

There was always going to be a flop on here somewhere. Ngog was a highly touted prospect for both Paris Saint-Germain and the French youth squads, and his first real taste of English football with Liverpool in 2009-2010 looked very promising. He started ten matches and subbed on regularly. He scored five goals on 40 shots, 27 from the danger zone. His goals total matched closed his expected goals of about 5.6. With over 1000 minutes played and 0.50 xG/90, this looked like a great season to build on. Instead, he just got worse, dropping to 0.3 xG/90 in 2010-2011 and 0.2 xG/90 the next season. He ended up a backup for Swansea City this season, where even in that limited time he did very little. So it's not all sunshine and happiness on these lists.

Here's a cool one. Carlos Vela started three matches for West Bromwich Albion on loan from Arsenal, and he got several substitute appearances for both the Baggies and his parent club. He scored an impressive three goals from fourteen shots, eight from the danger zone. With about 2.1 expected goals in 377 minutes, Vela rated an xG/90 of 0.48. Despite these good numbers, the Mexican international was loaned out to Real Sociedad the following season and eventually sold for about £4m. He's become a key part of the Basque side's impressive counterattack, scoring in double digits in the league for three consecutive seasons.

Chalk these up to "100 minutes is very few minutes." We've got just six shots combined for Macheda and Delfouneso, three from the danger zone. But it is a fair warning that Kane's 500+ minutes also are not the hugest sample.

Welbeck got a full season of minutes for Manchester United in 2011-2012, and I wonder if he's been underrated a bit because of some finishing issues. He scored nine goals on 80 shots compared to 10.7 xG. The failure to notch double-digit goals is hard to hold against someone with a solid rate of 44 danger zone shots in a little over 2000 minutes. I think Welbeck could be a very nice buy-low(ish) target for someone this summer if he comes available.

Here's obviously the prototype for the buy-low(ish) move on a striker with an elite youth career. He scored eight goals on 70 shots (though just 20 from the danger zone) between Chelsea and a loan spell at Bolton. With about 5.3 xG in over 1000 minutes, Sturridge rates out at 0.43 xG/90.  He scored 11 non-penalty goals on 93 shots in his next season (which did see a drop to 0.34 xG/90), and then got sold for cheap to Liverpool. We know what came next.

The Southampton Saints might have another young star on their hands. Gallagher has scored only one goals so far, but with six danger zone shots out of nine and 1.7 xG, his shooting production has been very good. And he's about as young as they get on the list. Of course, with just 353 minutes played, he only has a couple more games than Macheda, the great sample size fluke of the bunch. Still, given the record of Southampton's academy and some good early returns, there's a lot to like in Gallagher's first EPL season.

Weimann has developed into a solid Premier League player, but he has not managed to maintain the impressive shooting record he put up in his fourteen matches (five starts) for Aston Villa in 2011-2012. He scored two goals on 19 shots (eight from the danger zone), for an xG/90 of 0.42. Shifted into a support role behind Christian Benteke, Weimann has dropped off in both scoring and shooting, though he appears a capable EPL player with still potential for more.

The best young strikers in the Premier League show up multiple times on the list. (This is probably the best statistical knock on Welbeck, whose other production numbers fall further down the table.) It's notable that both Sturridge and Balotelli were sold, and Lukaku is reasonably likely to be transferred this summer. If the track records of the other two are any indication. Lukaku (whose numbers are clearly better than Sturridge's and Balotelli's at a younger age) should be a fantastic acquisition.

The sample size on Harry Kane is still too small to confidently put him in the same category at elite talents with thousands of minutes like Lukaku, Sturridge and Balotelli. But in the time he's been given, Kane has put up numbers that would not look out of place on the stat sheets of any of the best young strikers in the league over the past several seasons.

That's what you came for, right? Here's the underlying data for these sixteen seasons.