Spurs may be moving for Ron Vlaar

I think this move would make sense, but the sourcing is exceptionally weak. It's probably not a thing, sadly.

Share All sharing options for: Spurs may be moving for Ron Vlaar

There is a rumor circulating that Tottenham Hotspur are looking to acquire Ron Vlaar from Aston Villa. I don't think this rumor is pure batcountry because Vlaar is the sort of player that Spurs could and should be targeting. But I'm skeptical.

First, before the ritual debunking of the tabloid rumor, Ron Vlaar is really good. If Tottenham could acquire him to play alongside Jan Vertonghen in a first-choice center back pairing, that would be great. By my numbers, in the last two years Villa have been about 40 percent worse than average defensively when Vlaar has been out, and just about dead average with Vlaar in the lineup. (This is based on expected goals conceded, adjusted for home/road and opponent quality.) He was a beast at the World Cup, and I think that shows what he can do with the right teammates around him. The problem is that Aston Villa are kind of terrible. 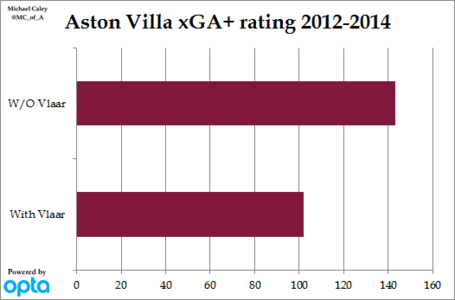 Now for the problems. First, the rumor comes from the Daily Mail. So that about seals that. But it's even poorly sourced for a Mail rumor. All they say is this:

Tottenham are considering a move for Aston Villa defender Ron Vlaar and could use midfielder Lewis Holtby as a makeweight. The Dutch centre-back is in demand after helping his country reach the World Cup semi-finals in Brazil earlier this month.

Tottenham are also prepared to offer Michael Dawson in a player-plus-cash deal but he is reluctant to leave London.

"Are considering" is weak even for the Mail. It implies that no actual activity or event has occurred, merely that maybe there have been a few discussions around Spurs Lodge on the topic. And the rumored swap deal appears to have been constructed out of whole cloth. Tottenham "could use Holtby as a makeweight." Yes, and Levy could bake a nice batch of shortbread cookies for Paul Lambert to win him over. These are all things that the people involved are capable of, but which there is no evidence they have done or plan to do.

In the Guardian, David Hills notes that a Vlaar sale would also go directly against Lambert's clear statements to the media. While many managers have had to walk back strong "he won't be sold" statements, it's another mark against an already very weak link.

I hope this happens, because I like Ron Vlaar a lot. But so far, this is a non-story.