Two weeks ago, the Premier League results could not have gone better for Chelsea if Abramovich had paid off all the players and officials himself. That was fun. This week, it was Arsenal's turn to roll boxcars. Manchester City and Chelsea played to a draw. Liverpool, Tottenham and Manchester United not only all lost against bottom-12 sides, they all were soundly outplayed over a combined 270 minutes of football. So not only do the lost points count against the projections of all three clubs, but they also see their underlying ratings take a hit. Arsenal, of course, won easily away to Aston Villa and come into the North London Derby on a high note.

The losses of week five also included Everton away to Crystal Palace, although the Toffees alone of the defeated powers at least managed to play like a competent football team and produce by far the better set of chances. 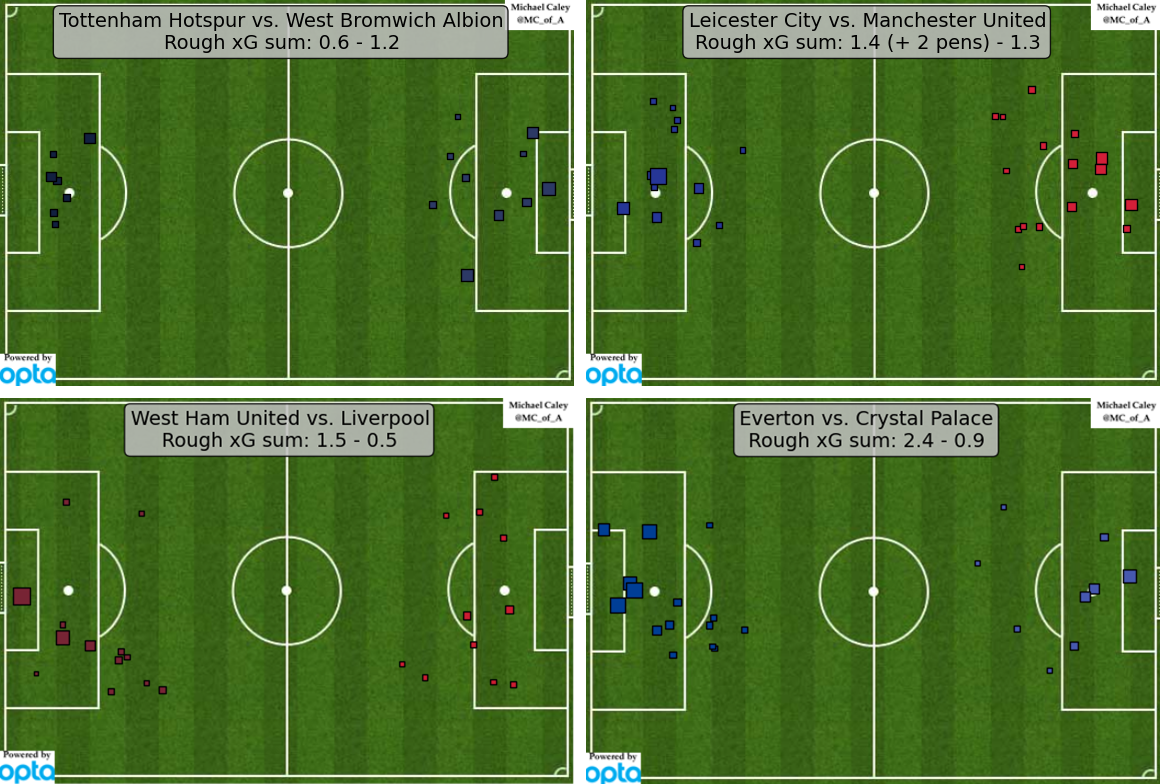 Manchester United managed to create some real chances, which puts them ahead of Liverpool and Spurs, but the two penalties conceded plus a hilarious breakaway goal also put the Red Devils behind defensively. There were no winners here.

Of course, the season is far from over. Liverpool despite this loss still hold onto a solid 4th place position in my projections. There is little doubt that Liverpool are beatable, but so far none of the teams below has played any better than the Reds. Spurs and Everton have not been much better than an average team by xG, and when opposition quality is accounted far, Manchester United has been below average, as I explained on Fancy Stats earlier this week. My numbers continue to rely on 2013-2014 data to make up the majority of the projections, and Liverpool's massive advantage there keeps them ahead. We will see if that advantage holds up. So far, subjectively, I think it does. Liverpool and Arsenal look to be headed for 3rd and 4th by default, more than anything else. But there is time and opportunity for United, Everton or Spurs to turn things around.

And my spreadsheet would add, don't forget Southampton. Even in a drab performance away to Swansea, the Saints conceded shots worth only about 0.4 expected goals. This is a highly capable defensive side, with just enough firepower to carry them quite a way. If Ronald Koeman can keep his relatively thin squad healthy, it will be a long time before Southampton gets eliminated from top four discussion.