Welcome to a not totally unfamiliar scenario. Tottenham Hotspur have a lot of talent, but are yet to put it all together. They're facing an Arsenal team that looks vulnerable, but is definitely in much better form than Spurs, and looks a more cohesive unit. This generally ends quite poorly for Tottenham.

It's not that difficult to envision a world in which Hugo Lloris stands on his head while Christian Eriksen and Erik Lamela turn in dominating performances, helping Tottenham to an upset victory. But it's even easier to see an embarrassing result, with Arsenal scoring four or five. Yes, anything can happen here, but there's little evidence to suggest that Spurs are ready to pull off a big result.

Mauricio Pochettino could pull off some shocking lineup changes, but he seems to have a pretty good idea of what his A-team is. It seems to include Younes Kaboul and Vlad Chiriches, which is mildly terrifying, but it's not like Jan Vertonghen and Federico Fazio are looking flawless.

It's nice that we're not missing anyone but Walker, but he's a pretty big miss. Kyle Naughton has been less than impressive this season and Eric Dier doesn't look particularly polished at right back. He's given away some bad goals this year. Thankfully that's Santi Cazorla's side, not Alexis Sanchez's, but it's terrifying nonetheless.

We're guessing that Arsene Wenger moves Mesut Özil back where he belongs and sits Jack Wilshere, but maybe he keeps rolling with this silly 4-1-4-1 thing. I'm hoping this projection is wrong and we get Özil on the wing again. Also hoping that Spurs roll with Harry Kane over Emmanuel Adebayor, but not holding my breath. 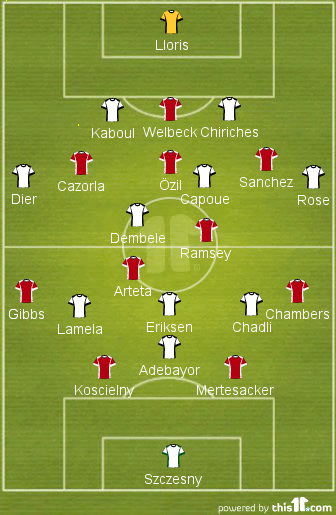 Super good news for everyone, everywhere: This game will be really easy to watch no matter where you live, or if you prefer TV or a stream. All the relevant info is below.