Tim Sherwood is a backstabbing monster and he saved Tottenham Hotspur

Tim Sherwood was clearly the worst but his significance cannot be denied.

Share All sharing options for: Tim Sherwood is a backstabbing monster and he saved Tottenham Hotspur

On December 15, 2013, Liverpool humiliated Tottenham Hotspur 5-0 at White Hart Lane. The next day, two alternate timelines diverged. In one, Andre Villas-Boas knuckled down and saw out the season, maintaining the status quo with his typical gravelly-voiced charm. He couldn't quite get his band of misfits to gel, but chairman Daniel Levy gave him the time he needed to try turn it around before they parted ways with mutual consent at the end of the season. In the other, his relationship with Levy soured beyond repair and backroom-staffer Tim Sherwood undermined AVB's authority before helping him over the ledge and out of the club in a cloud of ignominy.

Ask almost any Spurs fan, and even those who recognize AVB's obvious limitations would have preferred to see the first timeline play out. If nothing else, Villas-Boas's achievements with the club had earned the right to see the season through to the end, particularly in the wake of so many new signings and the loss of the world class Gareth Bale.

The timeline we got was a fractured mess of behind-the-scenes backstabbing and infighting between the fans so violent Twitter itself was nearly torn asunder. The one we dream of is a period of grace, unity, and mutual respect, with the whole club pulling in the same direction.

But though it may not seem so, the timeline we dream of is the darkest timeline, and we are all incredibly lucky not to be living in it. Because in that timeline there is no Harry Kane.

Tim Sherwood's freewheeling reign of terror was marred by incoherent tactical nightmares and cringeworthy soundbites to the media. AVB has recently spoken out about the poisonous underhanded backstabbery Tim Sherwood delighted in. Yet despite the Lovecraftian horrors lurking beneath the surface of every post-match interview, there's one thing Tim Sherwood got right. In fact, he got so right he just may have inadvertently saved Tottenham's entire future.
Tim Sherwood believed in the youth. And not just youth for the sake of it, not just kids who would get stuck in and bleed for the shirt because they grew up wearing it. Tim Sherwood spent years at the head of Spurs' youth academy and trusted the talent it produced to not just want to play for the shirt, but to thrive wearing it. 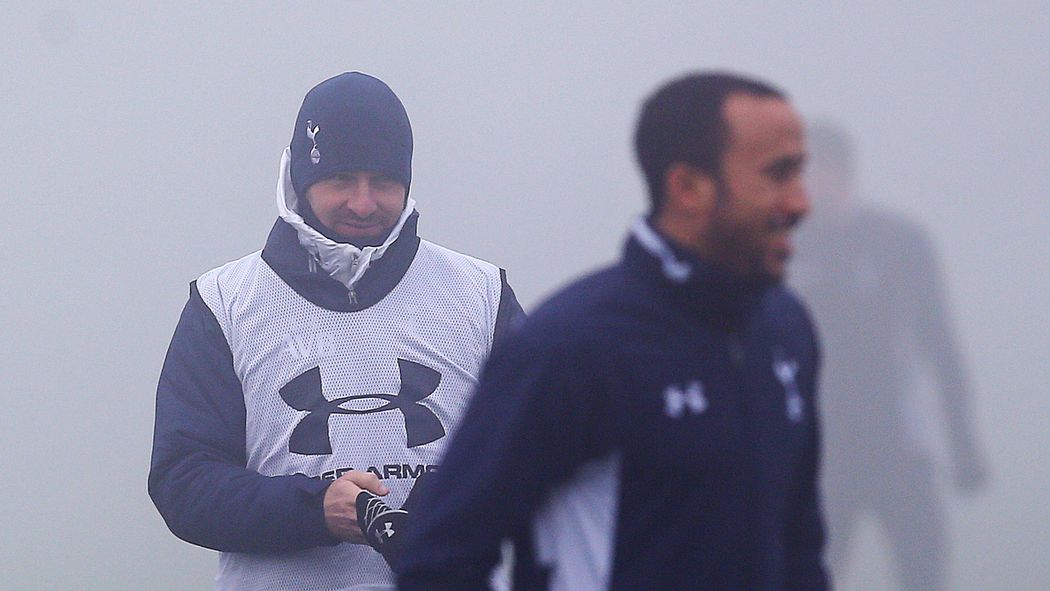 This is in stark contrast to Andre Villas-Boas, who would only trust academy prospects to pick up his dry-cleaning, even if the entire first team came down with a case of pre-match dodgy lasagna. He notoriously exiled Chelsea's entire youth team while in charge at Stamford Bridge, and failed to improve his relationship with the youth to any significant degree at Spurs. Only Premier League-proven academy grads Andros Townsend and Steven Caulker were given a real shot (and Caulker was quickly shown the door). In a few cameo appearances in AVB's first season, Tom Carroll had seemed to do enough to earn starts, but instead of giving him a chance he sent Carroll to toil on loan in the Championship instead.
But under Sherwood, 19 year-old Nabil Bentaleb became a permanent fixture in the side at the expense of summer signing Etienne Capue and earned a chance to play in the World Cup as a result. Harry Kane scored three goals in his role alongside Adebayor, while once-record signing Roberto Soldado warmed the bench. A teenage Milos Veljkovic was given chances as a substitute. Sherwood even pushed for a loan recall to rescue Tom Carroll because he believed in him ahead of more glamorous and expensive imports.
It is this platform that has given Spurs fans real hope for the first time since Gareth Bale was single-handedly winning matches en route to Madrid.
Today's headlines are all about Harry Kane and his humbling of one of the best teams in Europe. But the only reason we're in the midst of a Category 5 hurricane is because Sherwood gave him the opportunity to prove he couldn't be ignored. His phenomenal performances this season have catapulted him towards stardom, but anyone who was paying attention last year could see the wind was already blowing his way. Without that opportunity, it's hard to envision Kane leading the line for Spurs every week instead of fighting veteran journeyman for minutes on yet another fruitless Championship loan.
It's no coincidence that the success of Sherwood's youth advocacy was followed by the appointment of notoriously youth-focused manager Mauricio Pochettino. Pochettino has picked up the torch and handed chances to Kane, Bentaleb, and Towsend, while revitalizing the career of Ryan Mason. Even younger players like Harry Winks and Josh Onomah have made the bench in the Europa League. There's a palpable sense around the club that Spurs' academy is an integral part of the club's strategy going forward. Instead of wondering which lower league team Alex Pritchard will end up playing out an unspectacular career, there is excitement about what he might do when he returns home.
We've endured bluff wheeler dealers and dapper continentals, we've endured ketchup bannings and halftime sackings. None compares to the six months locked in the depths of surreal Sherwoodian madness we endured last spring. But thanks to his reign, in Harry Kane, and probably Nabil Bentaleb, and possibly many many others, Spurs look to be building a homegrown core to carry this team forward for years to come.
It's hard to believe, but one of the worst managers Levy has ever appointed could be the cornerstone of our future.