A couple weeks ago I wrote a fan post about Spurs present and future financial status. Little did I know at the time how relevant that article would become. With Danny Rose unwisely complaining to the press late last week suggesting that he was not getting paid a fair amount.

These remarks have sparked a firestorm of criticism, but surprisingly very little of the criticism is about the CONTENT of Rose’s remarks, but rather the timing and platform in which Rose made these remarks. Many (but not all!) agree that Rose is indeed underpaid, and does indeed deserve a raise from his reported £65k/week. However, the question that immediately follows is ‘Can Spurs afford to pay Rose market wages?’ There’s been a number of articles seeking to answer this question. But what they have all failed to capture is that in addition to the Premier League’s revenue boom, Spurs have undergone an even more marked revenue boom. With this in mind, I didn’t want to see another re-hash of what Spurs’ wages were in 2015, and then a casual analysis of how much Danny Rose could make this year using those 2015 figures. It's lazy analysis.

As I explained in some detail in my previous fan post, in 2015/16, Spurs spent the 2nd least in the Premier League in wages in comparison to their total revenue. Perhaps surprisingly, Manchester United spent the LEAST in wages relative to revenue (wages:revenue), but also spent the MOST in real terms (£232m). This is because United are massively wealthier than even the next wealthiest club.

It would be unfair and unrealistic to expect Burnley to try to compete with United to maintain the same wage bill. However, it would be fair to expect Burnley to pay the same proportion of their total revenue to wages. In the Premier League, the average among PL clubs in 2015/16 was 61.6%. The season before, it was 60.4%. For simplicity, we’ll use 60% as league average. The big 6, however, varied. Manchester United (45%), Spurs (48%), Manchester City (51%) and Arsenal (55%) spent less than average, while Liverpool (69%) and Chelsea (67%) spent more than average, so there isn’t a typical approach for the bigger clubs.

The Premier League Has Gone Crazy

We can all agree that the Premier League has gone crazy. The infusion of money both internally (primarily through increased television revenues) and externally (primarily through insanely wealthy individuals [or even countries] buying clubs) has resulted in a league that is entirely divorced from past experience. While costs were already rising two years ago, £12m could buy you Toby Alderweireld or Jan Vertonghen, experienced international centre backs. Now, it can buy you the left leg of an inexperienced, Colombian youth product. To expect to be able to pay 2015 prices in 2017 is silly and naïve. For that same reason, it’s silly and naïve to expect Spurs to pay the same wages to their players in 2015 as in 2017. The Premier League is massively wealthier, and so is Tottenham. 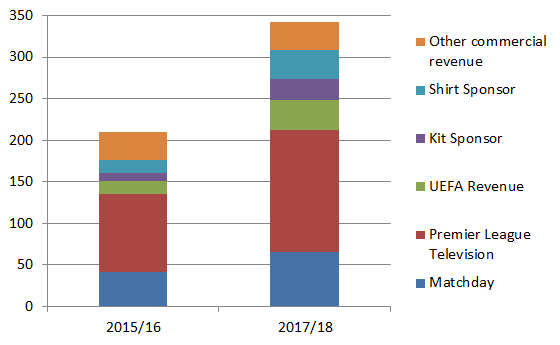 As I explained in more detail in my earlier article, Tottenham’s revenue has increased significantly in the past two years, since 2015/16. The new PL television deal began paying dividends last season, which was worth an increase of £53m on the previous season. Spurs signed an extension with AIA as their shirt sponsor, which was worth £35m per season, an increase of £19m per season. Spurs also signed a new kit sponsorship deal with Nike worth an estimated £25m, an increase of £15m on our previous deal with Under Armour. Those three deals alone amount to an £87m increase in commercial revenue since 2015/16. Spurs also received a windfall of just under £40m for a disappointing Champions League campaign, which they hope to improve upon this season. Finally, Spurs also look to earn an increase in match day revenue for playing 27 full-capacity games in 90,000 seat Wembley. Unfortunately the terms of Spurs agreement to rent Wembley from the FA are not publicly available, except that Spurs are paying the FA £15m to host games there. Fortunately, we can glean information from other sources, like the FA’s annual reports. In 2015, for example, Wembley generated £83m for 28 non-FA events held at the stadium (essentially the events that Spurs will be occupying this season), plus another £21m for England international games and the FA Cup semi-finals and finals. Furthermore, the NFL indicated that it had made $32m in ticket sales from their three games held at Wembley last season, or £8.5m per game. This suggests we could earn somewhere between £3m to £8.5m per game. Let’s err on the low end, the NFL’s ticket prices were considerably higher (£80) than the average Spurs ticket price in Wembley, and estimate Spurs can generate £3m per game (which would equate to 60,000 tickets being sold for £50 each, which appears to me a reasonably conservative estimate- if you disagree, feel free to let me know why). Over the course of 27 games, that would amount to £81m minus the £15m rental fee, and we’re looking at £65m in gate receipts, a further increase of £25m on the £40m we’ve consistently received from White Hart Lane. 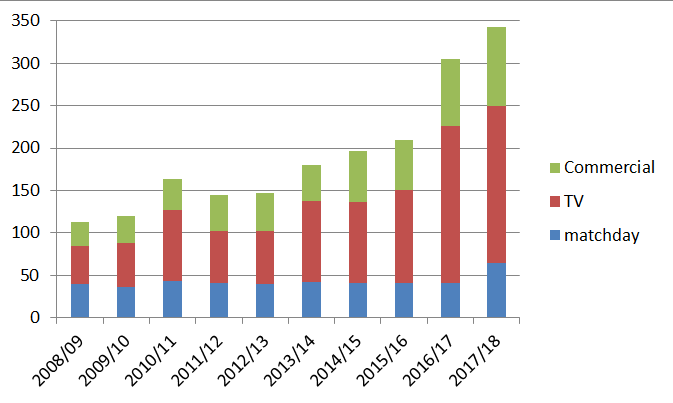 Altogether, these new revenue streams amount to a considerable increase upon two seasons ago. Our revenue should be at a minimum £340m this season, with it expected to rise higher next season when we move into our new stadium, which the club has stated will generate £100m in match day income, and hopefully arrange a naming rights sponsor, which Levy hopes will fetch as much as £40m per season. Furthermore, the television revenue, kit and shirt sponsors will remain in place for at least two more years, securing stable revenue streams. The only variable revenue is Champions League revenue of £40m, which could disappear after a disappointing season, but this would be more than offset by the new stadium.

What is a fair wage bill for Spurs?

Having established that Spurs revenue has increased, what is a fair wage bill for Spurs, and therefore a fair wage for Danny Rose?

If we revisit that 55% wages:revenue that Spurs have more or less maintained for the better part of a decade, their wage bill SHOULD be £189m. That’s basically the same wage bill as Arsenal in 2015/16 (£195m). However, maybe you prefer that Spurs keep a streamlined and efficient wage bill like they did in 2015/16 with a ratio of 48%. Fair enough. Then Spurs’ wage bill should be £165m. 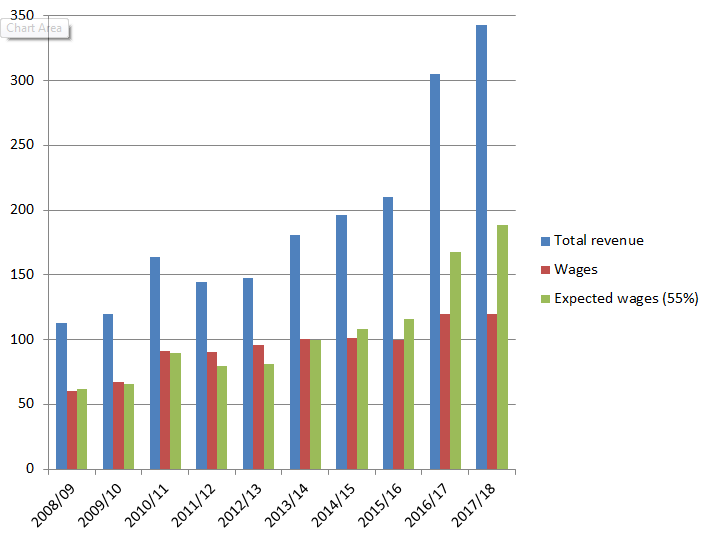 However, these wage increases and new signings have been partly offset by the departures of eight players previously on our wage bill (Nacer Chadli, Ryan Mason, Deandre Yedlin, Tom Carroll, Nabil Bentaleb, Federico Fazio, Kyle Walker, and Clinton N’Jie). With that said, our wage bill is almost certainly higher than £100m, but not significantly higher. How much though? Your guess is as good as mine (in the chart above I estimated our wage bill sits at £120m).

Since we’ve now moved into hypotheticals, let’s look at how this disparity between the £189m wage bill (using the 55% mark) and our current wage bill (>£100m) would work out.

Perhaps you feel like each of those player extensions signed last year were more profitable than that and our wage bill has jumped to £130m. Then the difference between our wages would still be £49m, or £43k more for each 22 first team players per week. Cameron Carter-Vickers’ wages jump to around £65k, just as Rose’s increase to around £110k.

In both of these scenarios, I’m oversimplifying, and each player would not be given the exact same raise. CCV would likely not get an equal raise to Eriksen, even if there is a strong commitment to equity on this team. The best players would earn more than the fringe first-teamers, meaning even more money would go to players like Rose. But one must ask, can we really not afford to pay the players more?

Spurs can almost certainly offer better wages to Danny Rose, and the rest of the team. Spurs have reached a cross-roads. On the field, they are just as competitive as their bigger, wealthier rivals, and with a number of smart decisions, Levy has begun to narrow the increasingly large financial gap between us and our rivals. It is only fair if the players are rewarded for their role in providing Levy the opportunity to generate these increased revenues.

How much they are rewarded is perhaps a question for debate. However, if Tottenham were to pay its players at a similar rate to how it has over the past decade, then they most certainly can afford to raise their wage bill by tens of millions of pounds, which equates to tens of thousands of pounds each week for every single player.