Tottenham released their financial report for the 2016/17 season today (for those that like the numbers, the more detailed financial report can be found here). Spurs announced a massive £100m increase in revenue on the previous season. This shouldn’t be very surprising, if you read my previous FanPost from last July in which I projected Spurs to earn £305m in revenue (curse that extra £1.3m!), but I still wanted to summarize some of the key findings and provide some additional context about Spurs’ finances going forward.

2016/17 was always going to be a big year for Tottenham. This was the year the vaunted Premier League television deal began paying dividends. Tottenham earned an impressive £94.8m in for their exciting title run and respectable 3rd place finish in 2015/16. In 2016/17, Spurs built on this success and finished 2nd, their highest finish in 54 years. With the influx of cash, Spurs earned a massive 58% increase, totalling £149.8m (£55m more than the year before)!

Spurs witnessed a few moderate increases in other areas, specifically domestic cup profits, due to Spurs advancing to the semi-finals of the FA Cup (the far more profitable domestic cup), which was worth an increase of £2.6m from the previous season, and a £2m increase in merchandising revenue (which I attribute directly to this sexy thing). Finally, Tottenham received a £5.9m increase in corporate sponsorship and hospitality. I believe this does NOT include our revised sponsorship deal with AIA, which was set to enter into force in 2017/18 and last until 2022. It also does not include our new deal with Nike, which enters into force at the same time. Therefore, this increase is likely an amalgamation of smaller corporate deals (such as those with Kumho Tyre and Leagoo) and generating more interest from our corporate box seats (also perhaps some of the revenue from having played four games at Wembley in Europe has bled into these figures).

A final bonus, which was expected but not assured in the future, comes from the Champions League. Spurs benefitted from the revised UEFA revenue sharing in 2015/16, which has allocated more revenue to the Europa League, in which Spurs were knocked out by Dortmund in the round of 16, earning a respectable £18.7m (a significant increase on the £7m we earned in 2014/15). In 2016/17, Spurs qualified for the Champions League. Spurs had a very poor showing, and after not advancing out of their group, parachuted into the Europa League, and followed with another extremely disappointing performance, getting eliminated by Gent. Despite this generally miserable return to the Champions League, Spurs earned £44.6, a £25.9m increase on the previous year. 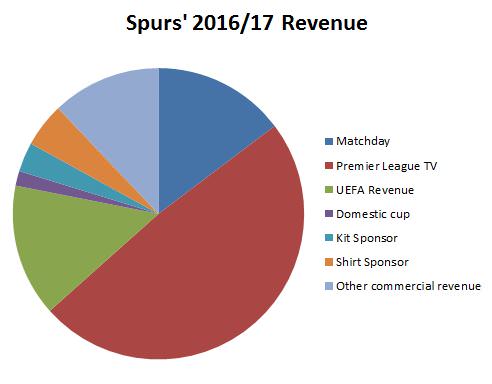 Apologies for the terrible Excel charts

This is actually quite encouraging, as it provides us with a great example of what the Champions League revenue floor looks like. Having topped our group (with five wins and a draw, in which each win is worth £1.3m, and draws worth £300k) and unluckily been knocked out by Juventus this season, Spurs are certainly set to earn substantially more than £44m this upcoming season. Furthermore, Spurs look set to qualify for the Champions League again this season, setting them up for some degree of predictability in funding over the next two years.

All in all, Spurs announced an eye-watering £117.6m profit excluding football trading and before exceptional items and depreciation (£41.2m after interest and tax). This is the single largest annual profit ever announced in the Premier League, as far as I can tell. Even in Spurs’ banner year of 2012/13, in which they sold Gareth Bale, they earned a then record of £80m. While our revenue has skyrocketed, our expenses have not risen nearly as significantly.

There are two key expenses for Spurs at this moment: wages and the new stadium. Wages have typically made up two thirds of Spurs’ total expenses, which is no different this year. After string of nearly twenty contract extensions to first team players in 2016/17, Tottenham’s annual wage bill (including player bonuses) increased 26% from £100m to £126m. This is by far the highest wage bill Tottenham have ever recorded (their previous high was £101m in 2015). It’s also worth noting that Daniel Levy may have given himself the biggest contract extension. His wages were increased from £2.8m in 15/16 to £6m in 16/17. To translate to footballing terms, Levy just got a raise from £54k/week to £115k/week (I wonder if he has some clause which matches Spurs’ best paid player). Levy has admirably run Spurs and turned them into the massive club that they have become, but one might also question the logic of paying him twice as much as the next highest paid director in the Premier League (Ed Woodward at £2.9m), especially when Levy’s 29% ownership stake in the club also confers significant wealth. However, if anyone deserves a share of Tottenham’s newfound fortunes, it is Daniel Levy.

The second expense is the real kicker: the new stadium construction. In 2016/17, Spurs spent a remarkable £315m on building their new stadium, having spent £115m in the previous year. This was financed in by a £400m loan acquired in 2017, as well as £200m in profit generated by the club over the previous decade, and likely from the record profits earned this season. Daniel Levy has repeatedly said that Spurs’ footballing operations will not be affected by the new stadium expenses, and with the record incoming revenue, there is little reason to worry about that happening. However, with the majority of construction taking place in 2017/18, and £430m been spent prior to this season, stadium expenses will surely rise well above the initial estimations of £750m.

With Spurs announcing record profits, they have set themselves up for a very stable financial future, especially with all revenue streams aside from the Champions League locked in for the foreseeable future. With that said, Spurs still have some additional significant revenue escalators to look forward to.

As I mentioned earlier, this newest report covers the first two significant revenue boosts: the new PL TV deal (worth a £55m increase) and the CL revenue (while not guaranteed, was worth £25m last year, and will increase significantly next year).

The next two escalators will arrive this season (and appear in next year's financial report): playing about 27 games at Wembley. Total revenue is still to be determined, as the terms of the agreement haven’t been made publicly available. However, if we look closer at the information, our matchday revenue increased by £5m from 2015/16, despite a ticket price freeze and demolishing 5,000seats in White Hart Lane for the new stadium construction. This clearly indicates that Wembley will generate considerably more income for Spurs than White Hart Lane. In my previous articles, I estimated a modest £25m increase in revenue (50% more, despite Wembley being 150% larger than WHL). In addition, Tottenham have two new sponsorship deals: shirt (AIA) and kit (Nike) sponsors, which begin in 2017/18. These will amount to a £19m increase and £15m increase, respectively.

The final escalator will come next year, when we move into the new stadium. There should be a big boost from Wembley to the new stadium, which I’ve estimated at £65m per year. Spurs officials have said they expect £100m (in line with what Arsenal make from the Emirates), which is a £35m increase on Wembley, and a £60m increase on WHL.

Then there's a huge wild card, which is the stadium naming rights. Estimates range from £10m (what Arsenal got 15 years ago for the Emirates) to £40m, which multiple articles have cited as what Levy is looking for. I'd expect something in between, but Levy has been known to work miracles. 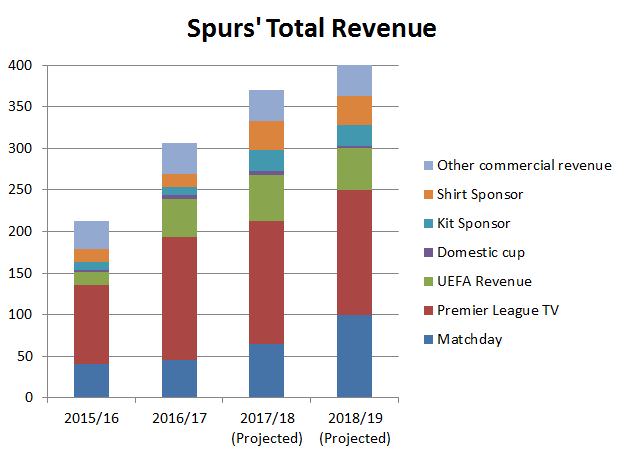 All things said, Spurs are on an upward trajectory. This financial report captures Spurs in their ascendancy. We haven’t reached the peak yet. That will come in our 2018/19 financial report in April 2020. By that point we will have reached revenues of right around £400m, with Champions League revenue relatively assured for another year.

Spurs at a Cross-roads

I will attempt to be as balanced as possible here, as you are all likely very familiar with my opinion on Spurs’ capacity to spend more money towards player wages. However, there are two things worth noting. Spurs earned record profits last season, in large part due to wages not increasing at the pace that revenue has increased. Spurs now spend 41% of their revenue on wages. This is by far the lowest ratio of any club comfortably in the top flight; most clubs spend between 50% and 70%. AND Spurs’ revenue will continue to increase by another £100m in the next two seasons. 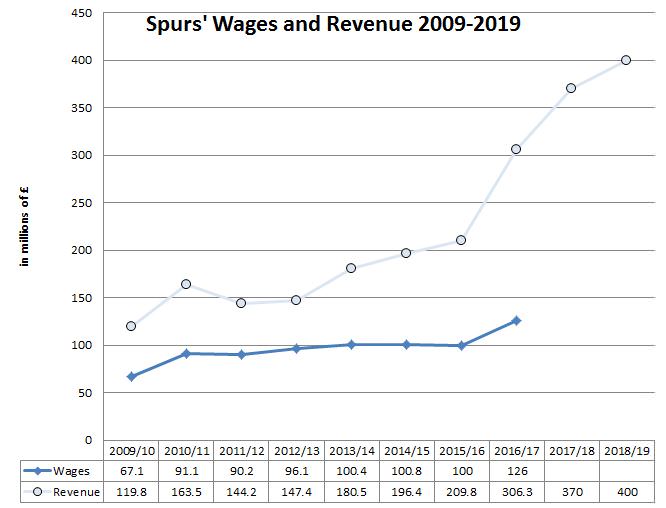 Tottenham currently stand at a crossroads. They must keep expenses to a minimum if they want to aggressively pay off their new stadium, which appears that it will cost in excess of a billion pounds. However, Spurs have begun to see the signs of strain on their austere management structure with Kyle Walker, Danny Rose and Toby Alderweireld bristling over Spurs’ financial limitations. So it appears prudent that Levy loosen the purse strings. To his credit, he has. The wage bill has increased to a new record high (£126m), however that wage bill is far, far closer to Everton and Leicester City (£105m and £113m, respectively) than it is to any of the other top 6 (Arsenal at £199m, Liverpool at £208m, Chelsea at £220m, and both United and City at £264m). While Spurs still have considerable room for growth, especially as revenue will continue to grow over the next two years, it would also be naïve and ill-advised to double the wage bill overnight. Spurs must gradually grow into their new skin.

However, with Daniel Levy operating in the shadows of the other top 6 financial giants for so many years, it will be interesting to see how he adapts to life in light, since under his leadership, he has turned Tottenham Hotspur into a financial giant.

Edit: a final hattip to Swiss Ramble, who was the original inspiration behind my interest in the topic and for much of the data in my previous fanposts. He's currently tweeting on the same topic. It's sure to be very interesting, with more insight on Spurs' position with regards to other PL teams. Plus, his charts are way better.